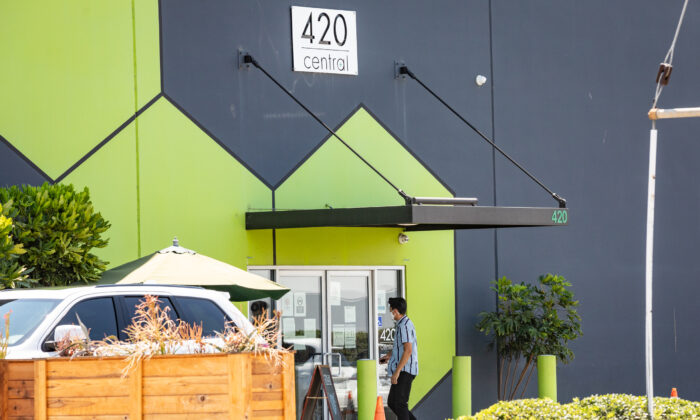 “I’m fine being the pearl-wearing Karen of the evening and standing up for what I see as the family values of Fullerton,” Fitzgerald said before the vote. “People can already use it, they can already grow it in their homes. That’s what Proposition 64 was about [a statewide proposition that legalized recreational cannabis, but left it up to local governments to regulate]. There’s no rush to do this in this city. And I believe that this council is putting potential revenue above the values of our city.”

The 3–2 approval followed a robust public comment portion of the meeting. Of the approximately 40 citizens who voiced their opinion in person, supporters were outnumbered about 2-to-1 by those who opposed the ordinance.

One resident expressed concern about how her high school-aged children would perceive legalization in Fullerton.

“The word ‘legal’ in the mind of a high schooler means ‘moral,’” she said. “So when you guys make laws … you make it moral for people. … You give them permission to do things that they normally would not do.”

“This is not about morality or immorality,” he said. “For me, it’s about creating laws that would regulate something that [is] … opposed to what we have now, which is lawlessness [that creates] this shady little black market.”

Zahra said he had spoken with a number of residents in his neighborhood, hosted meetings in his community, and listened to the citizens.

“I know I’m voting my conscience, doing what I believe is right by listening to people and making sure that we modify things so that it serves the community overall,” he said.

Lois Mock, who has lived in Fullerton for 55 years, told the council: “There’s a reason why most of the cities in Orange County don’t have it. I don’t think we need to be getting our money from legal marijuana shops.”

While retail cannabis is now legal in five of Orange County’s 34 cities, Santa Ana is the only city where it can currently be legally purchased.

Jesus Silva said the ordinance offered the best method for eliminating illegal shops. He also highlighted the “secondary impact” of helping the local economy, which has been severely impacted by financial woes, including through cannabis tax revenue.

One resident at the meeting said: “What is it that you do not understand about the statement: ‘We do not want to legalize cannabis in our city.’ You are our servants. This is our city. You are not listening to us.

“You need to listen to us, and if you don’t, we’re not asking you, we’re demanding that you vote No on this. Otherwise, a recall is in place.”

Councilmember Whitaker spoke out against the ordinance and said: “I would ask the council to at least understand, or try to understand, to get out of your shoes and get into the shoes of some of these people [who oppose it].

“Understand whether you agree with whether their concerns are valid or not. They’re very powerful, passionate concerns. And I would just request some respect for those constituents.”

Whitaker said the ordinance is “extremely divisive,” and said people are concerned about the availability of retail cannabis near their neighborhoods and schools.

“This is something that they absolutely don’t want. And to have this council impose that on those people, I think, is seen by them as being unnecessarily cruel. … These people are concerned about the permanence of this new presence in their neighborhood, something that they certainly would like to avoid.”

The current iteration of the ordinance requires a buffer zone of 600 feet between cannabis businesses and schools, daycares, and youth centers.

Councilmember Jan Flory, who made a motion to “untable” the ordinance at a Nov. 2 meeting, asked City Attorney Richard Jones how difficult it would be to change the ordinance in the future to include 100- or 500-foot buffers between residences and cannabis businesses.

Jones said making a change at this point would essentially cause the entire process to start over.

“It would be a substantial change, under the law,” he said. “You can’t make a change on [a] second reading without coming back and redoing that so people have a chance to talk.”

Mayor Fitzgerald said citizens are concerned because there is no way of telling people right now whether this is going to be right next door to them.

Jones said the city manager told him this was “a legitimate issue” that could be addressed in the future with a “clean-up ordinance.”

Flory offered a detailed explanation for why she supported the ordinance.

“I have really done a deep dive into some of these issues,” she said.

Flory said she received an email from a family with whom she is very close.

“[They] expressed their opposition to marijuana for a number of reasons,” she said. “I took that letter and I really fretted about it because this is a family I respect and I know how reasonable they are.”

Since the family was using examples of harmful impacts connected to cannabis in Santa Ana, Flory reached out to current city council member and incoming Mayor of Santa Ana, Vincente Sarmiento, to get more information about his experience.

Sarmiento told Flory that the additional revenue from cannabis sales allowed them to “get rid of the illegal dispensaries” throughout the city. A third of the revenue went to law enforcement, a third went into the general fund, and the final portion went to educate youth and families about cannabis use.

“He says they have been so successful in the last four years in getting rid of the illegal dispensaries, that one of the first things on his agenda will be to reduce the part of the revenue that goes into law enforcement,” Flory said.

“So, at the end of the day, this man, who has lived and worked and served on the city council in Santa Ana for many, many years, finds this to be a big win for the city,” she said. “And I think it would be short-sighted of us not to consider this in Fullerton.”

Cautionary tales have come from other cities in the country, like Pueblo, Colorado. The Epoch Times spoke with emergency room doctors there who said the sharp increase in potency of cannabis products being sold today and their perceived safety have led to a spate of teenagers experiencing psychosis.

The ordinance in Fullerton will go into effect 30 days after the Nov. 17 reading. Before releasing applications for commercial cannabis permits, the city will make application materials, frequently asked questions, and application guidelines available.