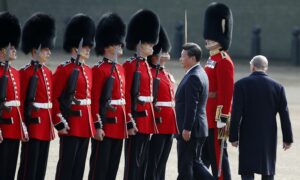 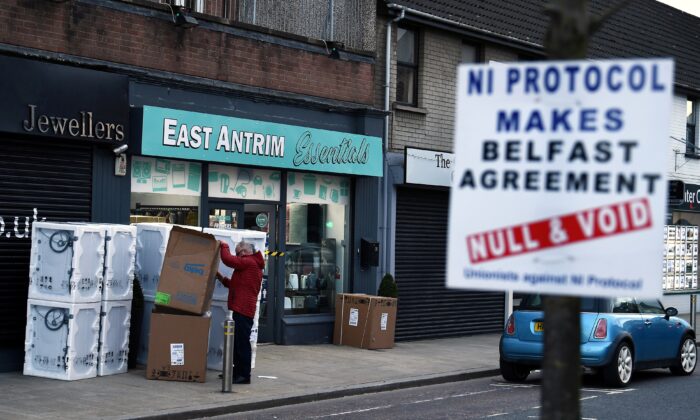 A man sorts through a delivery of washing machines with a sign is seen across the road featuring a message against the Brexit border checks in relation to the Northern Ireland protocol in the town centre of Larne, Northern Ireland, on Feb. 12, 2021. (Clodagh Kilcoyne/Reuters)
UK

LONDON—The introduction of full customs checks between Britain and Northern Ireland risks becoming “incendiary” when prices rise and favourite products fail to get through, one of the country’s biggest retailers said.

Archie Norman, the chairman of Marks & Spencer, told BBC Radio that the planned introduction of full post-Brexit checks in October would be “business destructive” and prevent the food and clothing retailer from providing its full range.

Customs officials have so far applied a light-touch approach to checking goods entering Northern Ireland from Britain under a protocol system that was designed to keep open the province’s border with EU member Ireland while stopping goods from entering the EU’s single market unchecked across that frontier.

Norman said the retailer had already struggled to get goods into EU members Ireland and France since Britain left the European Union’s single market at the beginning of the year, due to the huge amount of paperwork that was required.

He expects his stores in Northern Ireland to suffer a similar fate if the introduction of full checks goes ahead.

“It risks being incendiary for the public in Northern Ireland because you can’t think of a more visible demonstration of how you’re no longer a full part of the United Kingdom than you can’t get your favourite Christmas products, you can’t buy M&S chicken, free range eggs, sandwiches,” he said.

“It’s going to be very very serious for customers.”

The introduction of the protocol, which was agreed by Prime Minister Boris Johnson and effectively keeps Northern Ireland in the EU single market for goods, has forced M&S to employ vets to tick boxes and fill out forms. Switching supply chains to increase production in Ireland would increase prices, he said.

In a letter to Britain’s Brexit minister David Frost, Norman said M&S now completes 40,000 pages of customs documents per week to get goods into Ireland, and that will increase to 120,000 when the full rules for Northern Ireland start.

One error on a form can lead to an entire truck of 650 items being stopped, he said. M&S has cut 20 percent of its range in Ireland.

“I really, really worry about the visibility of this because … everyone in Northern Ireland is going to see, very very visibly, the impact of Brexit and the protocol because there will be gaps on the shelves,” he said, adding that they had already delisted some products for Christmas.

Norman, who followed rivals Tesco, Sainsbury’s, and Asda in warning about the situation, noted that Northern Ireland households already had less than half of the UK average of discretionary income, and that they now faced higher prices.