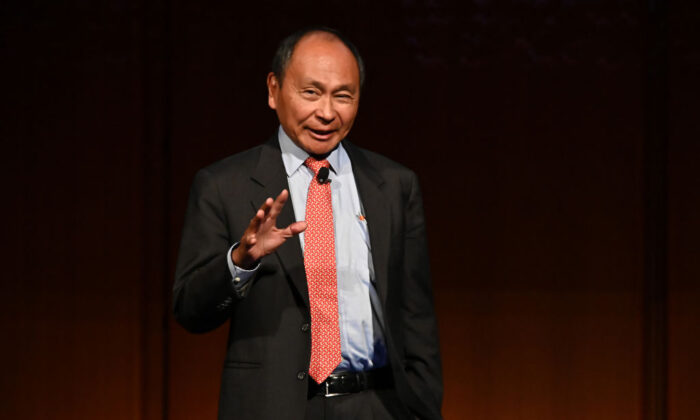 Fukuyama Gets the Old Band Back Together

What will happen in Ukraine?

You and I, mere mortals, do not know.

But Francis “End-of-History” Fukuyama is not so reticent.

The owlish foreign-policy intellectual has just issued a list of 12 “prognostications” that are as amazing for their air of certitude as for their preserved-in-amber globalist aspirations.

I’d like to comment on a few of those predictions and then say a word or two about their intellectual motor.

First, Fukuyama thinks that “Russia is heading for an outright defeat in Ukraine.”

Almost every commentator says that the invasion did not go as smoothly as Vladimir Putin thought it would.

But notwithstanding the endless stories about the pluck and determination of the Ukrainians, the Russians do not seem to have gotten Fukuyama’s memo.

Indeed, in the last day or two, many news sites are speaking ominously of an “escalation” of the Russian assault.

This seems to argue against Fukuyama’s second prediction, that the Russian collapse will likely be “sudden and catastrophic, rather than happening slowly through a war of attrition.”

Again, maybe that will happen, but, so far, all the evidence—as distinct from the wishful thinking—suggests that the Russians are digging in their heels and turning up the heat.

Third, Fukuyama says that “there is no diplomatic solution to the war possible …. There is no conceivable compromise that would be acceptable to both Russia and Ukraine.”

It’s too bad that Volodymyr Zelensky, the telegenic Ukrainian president, forgot to consult with Fukuyama before asking to meet with Putin to broker a ceasefire. He could have saved himself a lot of trouble.

Speaking of Putin, Fukuyama is also confident that “Putin will not survive the defeat of his army.”

Logically, I guess this has the form of a modus ponens: “If A, then B. A. Therefore B.”

I might be onboard with the protasis: were Putin’s army to be defeated outright by the Ukrainians, it is unlikely he could survive in power.

But are we entitled to the assumption that the Russian army is a toothless bear that is about to collapse?

The jury is out on that.

Fukuyama also thinks that Russia’s experience in Ukraine—by which I mean what he assumes the Russian experience has been—will, or should, teach the Chinese a lesson.

China, Fukuyama believes, should be chastened by the “miserable” performance of the Russian military.

By the same token, he says, what has unfolded in Ukraine ought to bolster Taiwan’s will to fight.

I confess that the analogy seems strained to me, but you can see why Fukuyama thinks that by considering the real center of his prognostications.

This has two parts.

First is the contention that Russia’s invasion of Ukraine “has already done huge damage to populists all over the world, who, prior to the attack, uniformly expressed sympathy for Putin.”

May I pause to ask, did they?

Have they expressed “sympathy” for Putin?

Or have they merely recognized that he is the leader of an important country that they must, for their own national interest, deal with?

According to Fukuyama, “the politics of the war has exposed their openly authoritarian leanings.”

Again, I ask, “has it?” How has Russia’s invasion of Ukraine exposed the supposedly “authoritarian” leanings of any of these figures?

Fukuyama, it turns out, is singing from an old song book.

It was printed back when the United States, flush from the collapse of the Soviet Union, bestrode the world as the sole superpower.

That moment passed soon enough, but Fukuyama did not heed its passing.

Which is why he concludes that we are, in the aftermath of his predicted defeat of Russia, about to witness a “new birth of freedom” (when in doubt, quote Lincoln!) that will reenergize the quest for “global democracy” and rekindle “the spirit of 1989.”

Talk about getting the band back together again!

You might wonder about the origin of Fukuyama’s confidence—a confidence, I should add, that has an ostentatious moral or (rather) moralistic element as well as a predictive element.

The source of both is the poisonous philosophy of G.W.F. Hegel.

As to Fukuyama’s grandiosity, he learned it from the master himself.

About his “firm and invincible faith that there is Reason in history,” for example, Hegel assures us that his faith “is not a presupposition of study; it is a result which happens to be known to myself because I already know the whole.”

It is cheering to possess knowledge of “the whole,” of course, but a bit daunting for the rest of us.

Meanwhile, it turns out that the West’s financial assault on Russia may hurt us almost as much as it hurts Russia.

After a brief moment of cheering that assault, the news is peppered with headlines like this: “Biden’s sanctions might hurt Americans more than Putin.”

Back in 2015, the canny “realist” foreign policy expert John Mearsheimer told us that trouble was brewing in Ukraine, and that the trouble was largely the fault of the West.

His analysis lacks the presumption of Fukuyama’s morality tale.

It does, however, have the advantage of historical sobriety.