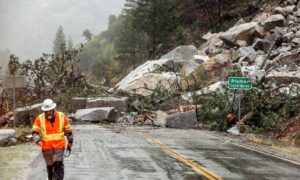 The last thing Fuaed Abdo Ahmed posted on his Facebook page—just hours before before taking hostages at a Louisiana bank Tuesday and being shot and killed by police as a result—was a photo of a man wielding a sword and jumping to attack a tank with it.

Only one Facebook user commented on the photo as of Wednesday morning at 6 a.m.; Twylia McKinney Joiner shared the photo and wrote: “This is the last post made by the man who held 3 people hostage in a Tensas bank. If there really is someone monitoring our facebook posts, this guy slipped through the cracks. There has to be an answer, but I’ll be the first to admit that I have absolutely no idea what that is!”

The photo of the man jumping at the tank was also accompanied by a quote. Ahmed quoted science fiction author Robert A. Heinlein, from his 1940 novel If This Goes On:

“When any government, or any church for that matter, undertakes to say to its subjects, ‘This you may not read, this you must not see, this you are forbidden to know,’ the end result is tyranny and oppression, no matter how holy the motives. Mighty little force is needed to control a man whose mind has been hoodwinked; contrariwise, no amount of force can control a  free man, a man whose mind is free. No, not the rack, not fission bombs, not anything–you can’t conquer a free man; the most you can do is kill him.”

Ahmed also posted a cartoon on August 10 showing a hostage situation. In the cartoon, a masked gunman holds a hostage and says, “I’ll release the hostage if you give me a sandwich!” Two police officers outside are shown. One says “How close is the nearest deli?” The other answers, “Three blocks.” The first officer says through a megaphone, “Okay, you can kill the hostage.”

Ahmed, armed with a handgun and a rifle, shot two hostages as police approached him, killing one and injuring the other. Charla Ducote, spokeswoman for Rapides Regional Medical Center in Alexandria, La., said the wounded hostage, LaDean McDaniel, was in critical condition Wednesday morning. The third hostage was released shortly before the shootings.

Police entered the Tensas State Bank branch in St. Joseph, La., where the 20-year-old Ahmed was holding the hostages after Ahmed said he was going to kill the hostages.

Several acquaintances, including the town’s mayor, said they saw no signs of trouble with Ahmed before the shooting. But two neighbors said they heard the sound of gunshots coming from near his house on Monday and Tuesday before the standoff.

Ahmed’s next-door neighbor, Nelda Bass, said she heard a single gunshot on Monday afternoon and saw Ahmed holding a rifle in his yard when she went outside to look around. He went inside when he saw her, and she didn’t call police at the time.

Bass said the house has been occupied by a group of men for several years, and she didn’t recall any women or children living there during that time.

“I didn’t know them well,” she said. “Some were friendly and would wave and say ‘hi,’ but some were standoffish and wouldn’t speak to me.”

St. Joseph Mayor Edward Brown said he exchanged pleasantries with Ahmed about an hour before the standoff began.

Brown described Ahmed as “just normal. That’s why it’s so bizarre to me.”

During hostage negotiations, authorities were able to get Ahmed on the phone with a friend in Alaska, Louisiana State Police superintendent Col. Mike Edmonson said. That was crucial in convincing Ahmed to eventually release a female hostage.

Ahmed was mentally unstable and had written a letter “detailing exactly what he was going to do,” Edmonson said.

“He was mad at people that he said were mean to him,” he said. “He had voices in his head.”

Edmonson said the man grew increasingly erratic as negotiations went on, sometimes hanging up on police. One of his demands to authorities was that they get the device out of his head, Edmonson said.