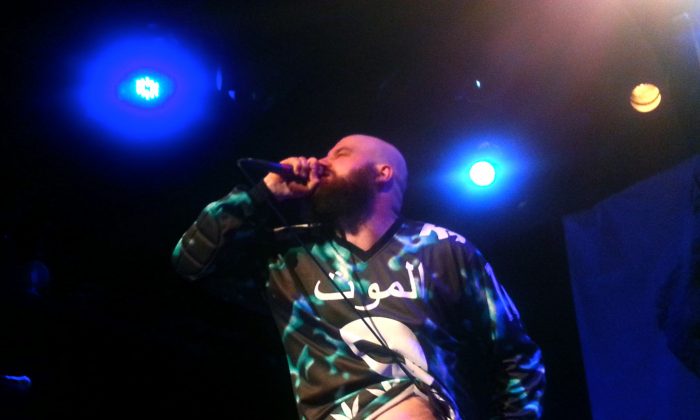 FU performed at Bowery Ballroom Friday night to a sold out crowd. The hardcore punk band from Toronto released their fourth studio album Glass Boys Tuesday and celebrated with a record release show at the relatively intimate venue.

They opened up with “Echo Boomer” from the new record. Things truly heated up when lead singer Damian Abraham leaped onto the middle of the mosh pit and sang “Paper The House” and “David Comes To Life.”  For the time he was physically with the audience, they embraced him and took complete advantage to sing along with him as he allowed them to sing into the microphone.

Other new tracks they’ve performed included “Glass Boys,” “Warm Change,” and “Sun Glass.” Although they were well received, the crowd went absolutely wild when FU closed with one of their earliest released songs “Police.”

In School and Big Ups got things started beforehand. In School were direct and extremely in your face as they blazed through their set while Big Ups offered a wider variety of punk and shoegazing in theirs.

As FU achieve higher levels of success and play more prominent venues, they continue to interact with its fans as if they were performing in the smallest of spaces where only music and fun matters.