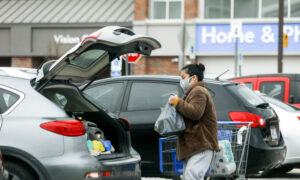 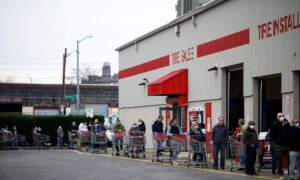 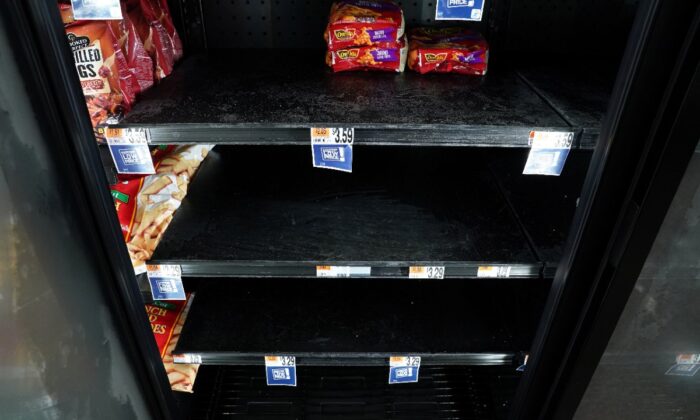 A few bags of frozen french fries are seen on sale in a freezer case at a Giant supermarket in Falls Church, Virginia, U.S., on April 23, 2020.(Kevin Lamarque/Reuters)
Business

Shopper Lexie Mayewski is having a hard time finding frozen french fries in Washington-area supermarkets because of disruptions to the food supply chain.

On the other side of the country, Washington state farmer Mike Pink is weighing whether to plow under 30,000 tons of potatoes worth millions of dollars that would have been turned into french fries for fast-food chains like McDonald’s, Wendy’s, and Chick-fil-A.

Their incongruent experiences underscore how America’s highly specialized and inflexible retail and foodservice supply chains are contributing to food shortages and waste in the wake of demand disruptions from the CCP (Chinese Communist Party) virus pandemic that has killed almost 50,000 people in the United States.

Frozen french fry sales at grocery stores spiked 78.6 percent for the four-week period ended April 4, according to Nielsen data, resulting in shortages at many U.S. supermarkets.

Mayewski, 25, a construction manager, has not seen frozen fries at the Giant Food or Safeway supermarkets near her Maryland home.

“There’s not a single french fry to be found,” said Mayewski, whose supply of frozen shoestring and waffle fries was running low.

“Our Ore-Ida factory is running at full capacity to keep up with demand,” Kraft spokesman Michael Mullen said.

Fast-food suppliers’ freezers are full of frozen fries, hash browns, and potato skins, and their storage sheds are packed with potatoes, farmers and experts told Reuters.

Their demand is down because four out of ten U.S. restaurants are closed, as are schools, hotels, and workplaces. Fast-food chains are doing drive-through only, and with no set date for lifting stay-at-home orders, the outlook for the foodservice industry is dim.

Pink, who farms near Pasco, Washington, said fast-food french fry suppliers canceled orders for 1,000 acres of potatoes. He has already invested $2.5 million on those crops. Each acre produces roughly 30 tons of potatoes and getting them ready for sale would cost Pink another $1.5 million. He may have to plow the potatoes under—adding to food destruction in the U.S. produce and dairy sectors.

“Do I continue to invest or do I stop and try to minimize my loss?” asked Pink. “It’s just devastating.”

The National Potato Council said there are $750 million to $1.3 billion in potatoes and potato products clogged in the pipeline.

“It’s a huge challenge. Nobody was prepared. Nobody could imagine that this could happen,” Rabobank food analyst JP Frossard said.

Grocery consultants and retailers told Reuters that foodservice products like toilet paper, cleaning supplies, and meat have found their way into the retail channel, while many others have not.

Compounding problems, most foodservice operators do not have connections at supermarkets—where adding a new product can take several months.

“It would be a Herculean task,” Allen said of rerouting supplies. And with all the uncertainty around demand, he added, “the investment would be tough to justify.”