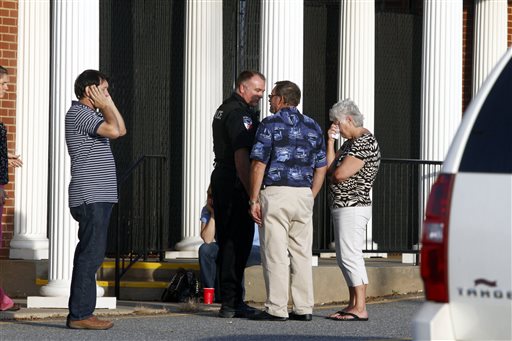 People gather outside of Front Street Baptist Church in Statesville, N.C. before church services Wednesday, Oct. 2, 2013. A bus carrying members of the church home to North Carolina blew a tire, veered across a highway median and crashed into a sport utility vehicle and tractor-trailer Wednesday in a fiery wreck that killed six people on the bus, authorities said. (AP Photo/Nell Redmond)
US

A bus from Front Street Baptist Church in Statesville, North Carolina got into a three-vehicle crash on Wednesday that has left eight people dead.

It could take a couple of days to identify some of the people killed in a fiery bus crash in Tennessee because some of the victims were so badly burned, the highway patrol said Thursday.

The church bus was was coming back from the Fall Jubilee in Gatlinburg, reported WBIR. It had 18 passengers. Six of them have died.

Dionne Stutts, wife of senior pastor Tim Stutts said the group that was on board the bus is called “The Young at Heart” and are mostly 55 years old or older.

Tim Stutts and another pastor from the church, which is about 140 miles east of the crash, traveled to the crash site.

“We are devastated and just ask for the people to be praying,” said Dionne Stutts.

Inside the Statesville church, people were crying and hugging each other. One woman whispered, “It’s going to be all right” while hugging another woman. A memorial service was held Wednesday evening. Police cordoned off the church to prevent reporters from talking to those who attended.

“There was a very long night for all of us,” Front Street Baptist associate pastor Rick Cruz said Thursday morning.

The church has received a tremendous outpouring of love from the community, Cruz said.

The Tennessee Highway Patrol said that the bus was traveling east on I-40 when its left tire blew out. The bus crossed the median and crashed into a tractor trailer, which clipped a SUV. The bus flipped over and the tractor trailer immediately caught fire.

The crash happened around 2 p.m.

The bus itself didn’t actually catch on fire, but there was some “heat exposure,” Jefferson County Emergency Management Director Brad Phillips said. Emergency responders were able to remove people who were alive rapidly to get them away from the flames and other Good Samaritans provided assistance.

The SUV was about 50 yards away from the tractor-trailer. It was still upright, but the back half had been completely ripped off.

He said authorities don’t know yet what caused the tire to blowout.

The highway patrol is investigating the wreck, which includes reconstructing what happened.