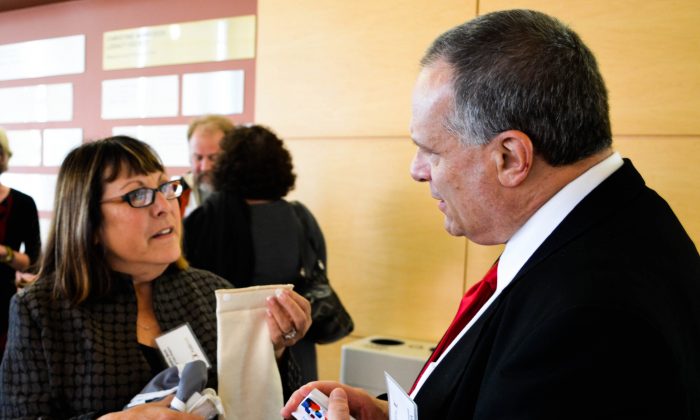 From Sweatshop to Workshop: Orange County’s Textile Industry On the Way Back

NEWBURGH—The fashion industry is returning to the Hudson Valley. That’s according to sponsors and participants of a conference hosted by FuzeHub at the SUNY Orange-Newburgh campus on Dec. 11. “This is our coming-out party,” said emcee Vincent Cozzolino.

Orange County was once the scene of a vibrant textile industry with dozens of mills and factories. It now will be home to high-end, high-tech studios and workshops that turn out limited-run wearables and fashion accessories, according to the conference participants.

Professor of Fiber Science at Cornell Juan Hinestroza presented research in nanotechology that can be used in the fashion industry. A single layer of nano molecules can color clothing instead of using dyes, which pollute waterways, and add layers of warmth a molecule thick to a cotton fabric.

Finding skilled labor is a big challenge for today’s designers.

Hinestroza’s research is translating the tactile function into a computer to create mathematical models that will say “I want this fabric to feel like this.” Technology is being developed so a designer can take a picture of a person, put the measurements into a computer, and build a garment “the way you want it the first time, right.”

Robert Tonner, CEO of Tonner Doll Co., said innovations like using nanotechnology will bring textile manufacturing back to the region.

CEO of Melo James Melville described a programmable machine in the needle trade business called a tacker that can do highly specialized operations “extremely precisely and extremely fast. It reduces the cost advantage that the Chinese have over us.”

To bring back textile manufacturing, Cozzolino, managing partner of the Galileo Technology Group, said experienced and tech-savvy workers are needed. The panel of textile makers and manufacturers spoke about how to transfer the skills of an earlier generation of textile workers to young people who want a career and creative outlet in textiles.

Today’s designers are looking for workers who see themselves as craftsmen in limited-batch apparel production. Robert Tonner’s high-end doll company had to go overseas for skilled workers.

Today’s designers are looking for workers who see themselves as craftsmen in limited-batch apparel production.

Finding skilled labor is a big challenge for today’s designers. Formerly, there was a large pool of skilled seamstresses that worked in textile factories. “Our biggest problem now is that we have lost that labor force,” Melville said.

Now a young person needs to learn basic seamstress skills and gain a tech education to work in the industry.

Melville said the people with those good skill sets in his company are approaching retirement and “we now are struggling. We would love to bring in a bunch more people.”

Panelist Nicole Lenzen said the younger generation is familiar with the tech side of textiles such as 3D modeling, data analytics, and algorithms that automate the manufacturing and give the apparel a better fit.

Tonner said the concept of trade schools has fallen out of favor, but that level of training is what is needed to build the industry back. Cozzolino said fashion schools turn out designers but not craftsmen who can make patterns or understand garment construction. “What’s happening is that you’re losing the skill sets. There are people who need that skill.”

We have the history, we have the skill set, and we are a technology corridor.
— Kelly Lyndgaard, CEO of handbag maker Unshattered

Lenzen bemoaned the fact that the most experienced cutters, sewers, and pattern makers are about to retire and there is no one trained to take their place. “There aren’t that many people who are interested in learning tailoring and learning that craft.” The bright side is that young people are interested in the data side.

Fashion schools are not teaching students how to use the new technology, but young people in Orange County do have those skills. “That’s a great opening for us. We are very technologically-oriented. We can capitalize on that,” Cozzolino said.

Green and for a Good Cause

Fashion starts at an early age. Tidy Tots Diapers owner Sandra Beck’s goal in starting her business was to keep more disposal diapers out of landfills. She came to the conference to find a manufacturer for her environmentally-safe, beautifully designed disposable diapers. The company is doing so well that it needs a manufacturer to reach the next level.

Tidy Tots uses natural, biodegradable materials. Its hemp diaper has a corn starch liner that can be pulled off after use and simply flushed down the toilet. The diapers come with beautifully designed covers. Sizes are from newborn up to toilet training.

Kelly Lyndgaard, CEO of handbag maker Unshattered, the social enterprise arm of the Walter Hoving Home, says the company trains employees for advanced seamstress skills and has more orders than it can handle. Designers who formerly used women from the Amish community are coming to her. “I’m always looking for the availability of machines and how do we make more,” Lyndgaard said.

Celebrities of the region’s textile industry made appearances and were honored for their contributions. Anthony Sicari, Sr. said it is important to use the resources at the county’s disposal to create jobs and local products and be closer to the market.” Former Newburgh Mayor Nick Valentine owns a business that deals in textiles. Angie Bloomer’s factory has capacity to spare for new entrepreneurs.

Newburgh Historian Mary R. McTamaney reviewed the city’s history of innovation in the textile industry from James Orr’s bib overalls to Strook Woolens which used camel, alpaca, vicuna, and goat hair from the Himalayas and South America for woolens that were warm but without being heavy.

Newburgh and surrounding areas built an infrastructure of factories running on steam, a skilled labor pool, and machinery to offer good jobs in apparel production. There were abuses that are associated with sweatshops that exist in other countries today. That would not happen in a workshop setting with a smaller skilled workforce completing orders in limited batches.

Lyndgaard sees a big future in nanotechnology and wearable technology. “I think the U.S. can be at the forefront of that.” To do that, new business models have to be established.

The event offered networking among businesspeople from companies with products to make and services to make that happen. FuzeHub’s Acting Director Elena Garuc, said her organization wants to help small and medium manufacturers grow in NY state. Patti Racine said she was there to discuss the manufacturing space the city of Middletown has in abundance.

“It started in New York City in the garment district that has built up all this infrastructure in manufacturing and we got the overflow,” Cozzolino said. “We’ll take that.”

Laurie Villasuso is associate executive director of the county’s Industrial Development Agency, which co-sponsored the event. “The Accelerator works to attract manufacturing-based businesses in the areas of fashion design and production, and other industries,” she said. It does so “by providing below-market occupancy costs, workforce training, mentoring programs, easy access to experienced professionals, and a high-tech plug-and-play environment with SMARTT Pods,” according to the Accelerator’s website.

“We have the history, we have the skill set, and we are a technology corridor,” Lyndgaard said. “We can plug those things together and be unstoppable as a community.”