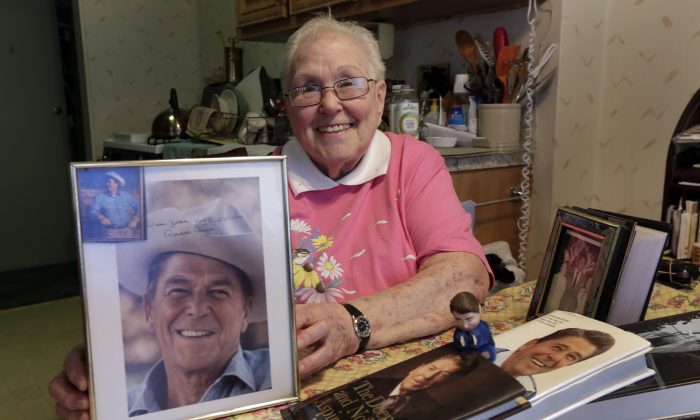 In this Friday, April 1, 2016 photo, former Ronald Reagan International Fan Club president Zelda Multz, 89, poses for photos with Reagan memorabilia in her apartment in the Brooklyn borough of New York. Reagan had an army of star-struck movie fans who wrote him letters - and who to their surprise often got a personal reply. For one writer in particular the replies added up to well more than 100 as Multz evolved from teenage president of the Reagan fan club to a lifelong literary friend of the man who, 40 years after she first wrote to him, became the nation's 40th president. The letters are going on the auction block April 18. (AP Photo/Richard Drew)
US

From Ronnie to a Fan: More Than 100 Reagan Letters for Sale

LOS ANGELES—Long before he was president of the United States or even governor of California, Ronald Reagan had an army of star-struck movie fans who wrote him letters — and who to their surprise often got a personal reply.

For one writer in particular the replies added up to well more than 100 as Zelda Multz evolved from teenage president of the Ronald Reagan International Fan Club to a lifelong literary friend of the man who, 40 years after she first wrote to him, became the nation’s 40th president.

His letters to her range from brief thank-yous for birthday cards Multz sent him to expressions of frustration at being relegated to roles in movies he knew weren’t very good to expressions of heartbreak at the dissolution of his first marriage and to anguish over the failing health of his elderly mother.

“I wish she didn’t need to suffer so much all the time, but you don’t hear her complain, always smiling and saying, ‘I’m fine.’ That’s my Mom Nelle,” Reagan says in one handwritten letter.

As the years pass, the letters come to include the future president’s thoughts on politics, his concern for the health of Multz’s own elderly mother and his joking responses about his mortality, noting in one missive that he prefers to think of his 81st birthday as the 42nd anniversary of his 39th.

They are variously signed “Ron,” ”Ronnie” and “Dutch,” the latter a nickname reserved for close friends.

“This shows a completely different side of his life, it shows Ronald Reagan the man,” says Profiles in History President Joe Maddalena, whose Calabasas-based auction house is putting the collection on the block April 18. “It’s his personal views on life, relationships, families and, think about it, there are even fan-club cards signed by the guy. It’s kind of surreal.”

The collection also includes more than 350 photos, among them candid shots of Reagan performing such mundane chores as working in his yard.

It is being sold intact by a historical documents collector who declines to be identified, Maddalena said. He said the collector acquired it a few years ago from Multz, who still lives in New York, where she became a Reagan fan when she saw him playing undercover G-man Brass Bancroft in the 1940 spy thriller “Murder By Air.”

“I just thought he was cute,” Multz, 89, said with a laugh as she spoke recently by phone. “It was just one of those little girlie things.”

So she wrote him a letter, not really expecting a reply.

Four years later she was in charge of Reagan’s international fan club and the two would maintain a steady correspondence for decades. Multz and another longtime pen pal, Lorraine Wagner, would also meet Reagan several times, in California, New York and even in his hometown of Dixon, Ill., where he and his mother invited them to join him in a parade in his honor.

Wagner’s own collection of letters is at the Reagan Ranch Center in Santa Barbara, donated by a buyer who acquired them through a previous Profiles in History auction.

Maddalena says Multz’s archive is the only other known such collection and has never been displayed publicly. A couple of the letters were referenced in Kiron K. Skinner’s 2004 book, “Reagan: A Life in Letters.”

The pair’s correspondence slowed during Reagan’s White House years, and letters during that time appear robo-signed.

But it picked up again after Reagan left the White House in 1989 and continued until he was diagnosed with Alzheimer’s disease in 1996.

“I got a beautiful letter from him before it really set in,” said Multz, who still vividly recalls its last sentence: “And Zelda is a name I’ll always remember.”