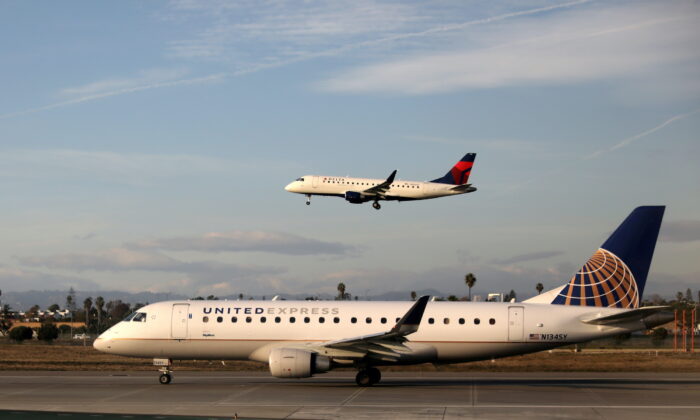 From Pilots to Ramp Agents: US Airlines Go All Out to Staff Up

CHICAGO—From offering premium pay to hefty signing bonuses or poaching workers from other airlines, American carriers are scrambling to ramp up staffing for the holiday season and prevent disruptions that marred air travel this summer.

After reducing headcount by thousands during the depths of the pandemic, the industry is grappling with shortages of pilots, flight attendants, and customer service agents.

A Delta Air Lines spokesperson said the company had no furloughs or job losses related to the pandemic. However, the company did have about 18,000 staff departures last year in the form of retirements or voluntary separations.

With willing workers in short supply across the United States and companies frantically vying for them, carriers are being forced to spend more to attract talent.

“The reality is that the hiring environment has changed as a result of the pandemic,” American Airlines’ chief operating officer, David Seymour, told employees in a memo this month.

Piedmont Airlines, American’s subsidiary, is trying to lure pilots with a $180,000 bonus offer. United Airlines is offering a $5,000 signing bonus for a ramp agent position in Boston. Spirit Airlines has bumped up wages for its ramp agents by 30 percent. The ultra-low-cost carrier is offering a one-time graduation bonus of $1,250 and up to $4,500 a year in tuition reimbursement to flight attendants.

The rush to hire is driving up costs at a time when soaring jet fuel prices and higher airport charges are also squeezing profits.

Southwest Airlines’ wage expense as a percentage of revenue is up by 14 points this year versus 2019. There have been similar increases in salary costs at other carriers including United and American.

Yet headcount at U.S. scheduled air carriers in October was 14.3 percent below the pre-pandemic peak. By contrast, employment at restaurants and bars, struck equally hard by pandemic lockdowns, is just 6.4 percent below its peak before the COVID-19 outbreak.

Industry experts attribute the sluggish recovery to the fading attraction of jobs with passenger airlines.

Wages for some entry-level airline jobs, particularly low-skilled ones, pale in comparison with those in other industries even as the work has become more challenging.

The situation is worse at regional carriers, which operate 43 percent of the flights of American, United, and Delta. These companies provide connectivity to low-density networks, but their pilots and crews are paid far less.

Even at the regional airlines that are subsidiaries of American and Delta, the wage gap is huge. For example, entry-level flight dispatchers at American earn more than twice the amount made by their counterparts at Piedmont Airlines. There is a similar gap between pay scales at Delta and its regional unit Endeavor Air.

Keturah Johnson, who heads the union for Piedmont’s flight attendants, said a lot of workers have been forced to pick up a second job as the wages at the regional carrier are not high enough to cover living costs.

“We are fighting for a livable wage,” said Johnson.

A Crisis Long in the Making

Analysts say the labor crisis was in the making long before COVID-19 hit the industry. They trace its genesis to a wave of bankruptcies and consolidations after the 9/11 attacks, which made carriers too cost-conscious and excessively focused on productivity.

As airlines slimmed down, they became more reliant on employees logging more hours.

The Association of Flight Attendants estimates the workload of flight attendants increased by at least 25 percent after 9/11.

The pandemic-induced plunge in air travel prompted the industry to double down on cost cuts, leaving it with the lowest headcount in more than three decades. Meanwhile, quarantine requirements or illness further depleted its resources.

“COVID was the tipping point,” said Henry Harteveldt, founder of travel consultancy Atmosphere Research Group. “It ripped the protective layer of the airline industry and exposed many of its underlying challenges.”

Airlines resumed hiring this spring as dipping COVID-19 cases brought passengers back. But the supply of new pilots is limited, and cargo carriers of Amazon.com Inc., United Parcel Service Inc., and FedEx Corp. are also vying for them.

Faye Malarkey Black, head of the Regional Airline Association, said the supply of new pilots fell 60 percent in 2020. This year, it is about 36 percent below pre-pandemic levels, she said.

Worries about a looming pilot shortage have dogged the industry for years. That did not stop carriers last year from pausing hiring and offering buyouts and retirement packages to thousands of aviators.

COVID-19 vaccine mandates, a dearth of workers, and an expected rise in demand is poised to create a “perfect storm” that could derail air traffic in the coming months, two top Republican lawmakers warned aviation authorities in November.

Faced with a crunch, they are now heavily poaching from regional carriers.

SkyWest Inc., which operates flights for Delta, American, and United, last month said its attrition rate is running into double digits. To be sure, regional airlines have been losing pilots to major carriers for years. But Black said that trend is now “on steroids.”

Subodh Karnik, chief executive of Georgia-based ExpressJet Airlines, likened the demand for pilots to the frenzy in the U.S. housing market where houses are getting flooded with offers within days of their listing.

He said one-fifth of the pilots at regional airlines are getting snatched away by big passenger and cargo carriers even before they can complete their mandatory training.

Inadequate staffing runs the risk of causing operational meltdowns of the kind that have led to a spate of high-profile flight cancellations in recent months.

Carriers such as American and JetBlue are offering bonuses, higher pay, and other incentives to ensure they have enough workers for what is shaping up as the busiest holiday season in two years.

United has decided to drop eight routes in the U.S. Midwest and South from its network. The airline’s chief executive, Scott Kirby, told travel news industry website Skift last week that the cuts were the result of a pilot shortage.

“We don’t have enough pilots to fly all the airplanes,” he said.