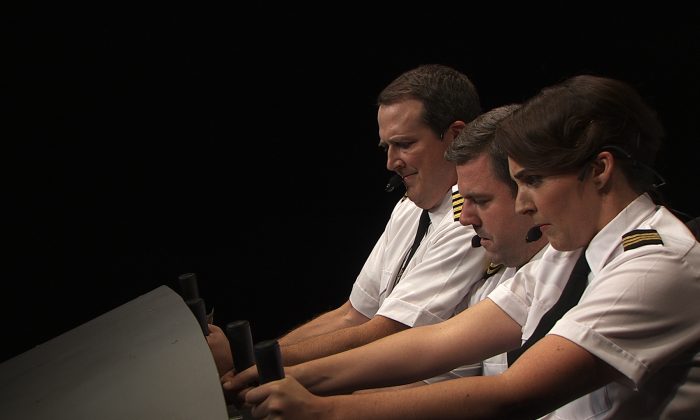 This is a rather bold programming choice, considering how many attending Sundance have flown in from New York and Los Angeles. Originally, it started as an Off-Broadway theater production, based on the real-life transcripts of black boxes recovered from plane crashes.

Though it retains the potentially stagey single cockpit set and the revolving ensemble, Robert Berger, Patrick Daniels, and Karlyn Michelson’s “Charlie Victor Romeo” holds the distinction of being Sundance’s first 3-D film, screening as part of the 2013 New Frontiers track.

For a film entirely depicting systems failures, it is ironically fitting that the screening I attended had to be presented in 2-D due to technical difficulties. While some of the schematics incorporated into the film might look cool in 3-D, it is hard to see how the film lends itself to the process.

The real story is the impressively realistic sound, designed by Jamie Mereness, recorded and edited by Kevin Reilly, and mixed by Joel Hamilton. The theatrical nature of the solitary set also becomes quite cinematic, thanks to the eerie lighting.

The constituent stories of “Charlie Victor Romeo” are a bit bracing, since in each case a plane is going down. The only question is how bad will it be. In general, the short ones are more disturbing. However, the clear dramatic highpoint of the film re-creates efforts to save a Peruvian flight that lost all instrumentation, including velocity and altitude, soon after takeoff.

The cast members are all quite strong in their various roles, particularly Patrick Daniels (the director and co-writer of the original stage version) in the Lima installment. They quickly create convincing working relationships among the flight crews, which are almost immediately tested in crisis situations.

“CVR” is kind of like the parts of Zemeckis’s “Flight” that audiences really want to see, played repeatedly with key variations each time. An intriguing application of technology to film (which is why it is a New Frontiers selection), but also an unusually faithful adaptation of a stage piece for the big screen, “Charlie Victor Romeo” is recommended for fearless flyers at Film Forum in New York beginning Jan. 29. Travel safe everyone.