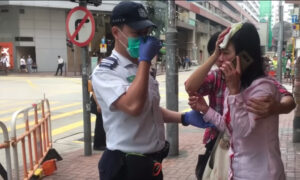 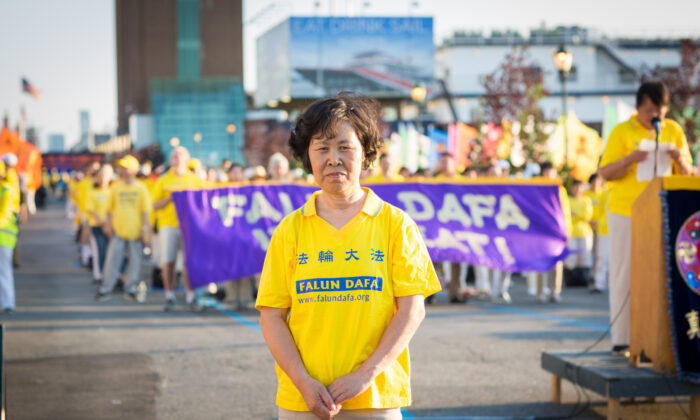 Li Dianqin with Falun Gong practitioners in front of Chinese Consulate in New York for a rally and candlelight vigil calling for an end to the persecution on July 16, 2017. (Benjamin Chasteen/The Epoch Times)
China Human Rights

From Near Death to New York: Prisoner of Conscience Recounts Torture, Abuse in Chinese Prisons

NEW YORK—When Li Dianqi collapsed onto a toilet inside a Chinese labor camp, with her head half-buried in the mess, she thought she was going to die.

The guards had earlier injected her with unknown drugs.

She was now too weak to move. Her limbs had turned red and swollen, while her muscles jerked convulsively. She could feel the blood rush to her head.

Li thought she would depart the world quietly, leaving behind all the filth and cruelty.

No more torture, no more brainwashing sessions and forced labor.

Fortunately, another inmate noticed her prolonged absence and came in to look for her. She was revived after spending three days in the hospital.

Li was jailed at the now notorious Masanjia Labor Camp in 2000 for refusing to renounce her faith in Falun Gong, a spiritual practice banned by the Chinese Communist Party a year earlier.

She took up the practice, which includes meditative exercises and a set of moral teachings, in the 1990s when she was suffering from a tumor, failing intestines, and chronic fatigue.

Li, whose family members also took up the discipline, said those ailments disappeared not long after she started the practice.

“Falun Gong not only saved my life, but also saved my family,” Li, who is now living in New York City, told The Epoch Times, referring to her daughter, who also benefited from the practice.

Falun Gong, also known as Falun Dafa, was introduced in China in 1992, and quickly rose in popularity, with 70 million to 100 million people practicing by the end of the decade, according to official estimates at the time.

Li attributed the practice’s popularity to its moral teachings, which center around the tenets of truthfulness, compassion, and forbearance.

“Falun Gong taught us to be kind, to be considerate of others, and incrementally improve ourselves to become a better person,” she said. “It brought happiness to the family.”

However, the communist regime deemed its popularity to be a threat to its control, and on July 20, 1999, it unleashed a nationwide persecution on adherents of Falun Gong.

Overnight, practitioners found themselves in the crosshairs of a brutal campaign aimed at eradicating the practice. State television began broadcasting continuous propaganda against the discipline. Meanwhile, an extra-legal office was formed to execute the persecution across all sections of society, from the workplace to schools to government bodies.

Li, like millions of other practitioners in China, thought it was all a misunderstanding.

So when the local opera house in the northeast Chinese city of Yingkou put on a play vilifying the practice in 2000, which was compulsory viewing for all school students up to grade 9, Li and four other practitioners were eager to speak to the theater’s manager to clarify the situation.

Li told the director about how the practice helped cure her diseases and gain more clarity in life. She implored him not to spread the propaganda. The director replied that he was merely following orders. He then excused himself and called the police.

She was arrested and detained as a result.

The following decade for Li was one marked by frequent arrests and detentions. She was transferred back and forth between local detention centers, prisons, psychiatric hospitals, and labor camps such as Masanjia to coerce her into mental submission.

On one occasion—her very first beating—the police took turns slapping and beating her entire body until her face became disfigured, and her two hands swelled and turned purple-black.

Still, Li refused to do the one thing the police asked of her: renounce her belief.

“I wasn’t afraid, because I knew I did nothing wrong,” Li said.

“I was arrested and released so many times I couldn’t keep track of them,” Li said, adding that her keen memory was something she used to be proud of. As a former accountant, she was known for her quick thinking and for being able to report sales data to her boss from memory.

But the torture left permanent damage to her head and memory—her head sometimes still shakes automatically.

One beating left Li palpitating as though her muscles were piling up together. Her eyes were bulging, her bones became disjointed, and her knee became heavily swollen. The pain didn’t go away until years later.

For three years from 2007 to 2010, Li sat on a three-legged stool in Shenyang Detention Center, a prison turned labor camp, to make plastic or cloth bouquets, some for export. She often worked from 7 a.m. to 1 or 2 a.m. to meet her production quota. Li recalled that the materials and packaging gave out a chemical smell so strong it was hard to breathe.

When Li was first taken to the labor camp, her only clothes were the light summer clothes she had on her back. An inmate later gave her a long-sleeve top and pants, and cotton shoes to get through the harsh winters. She didn’t have any money for the prison uniforms. When Li was freed three years later, her clothes had blackened from the excessive wear.

Li said the guards treated them like slaves because their bonuses depended on the labor output of the inmates, many of whom were Falun Gong practitioners like her.

“We bought you, do you know that? You think we’ll let you eat for nothing?” Li recalled the guards saying.

“I didn’t violate any law or commit any crime; it was the Chinese Communist Party that brought me here,” Li told them.

When things got difficult, Li said she’d grit her teeth and remind herself of the principles: truthfulness, compassion, and forbearance.

Once during custody, the guards ordered Li to clean the public toilet without giving her any tools.

“Don’t you cultivate truthfulness, compassion, and forbearance? Let’s see how you can manage this. If you can clean this up, I will admire you,” she recalled a guard saying.

Without complaint, she cleaned everything up with her bare hands and shoes until they got torn, comforting herself with the thought that by doing so she could at least make the living conditions for other practitioners a bit more bearable.

Li said that she was sometimes racked by guilt over how the product of her forced labor was supporting the regime.

“How could I make things for them [the regime], and [allow them to] make money so that they could continue to persecute more people?”

Li’s health quickly deteriorated over her many stints in detention: Her feet once became infected due to the unsanitary prison conditions; her stomach once swelled until it looked as if she were pregnant; her eyes were often bloodshot.

At one point, black pus began to secrete from her navel. She fainted frequently, sometimes multiple times a day. The inmates close to her were worried she wouldn’t make it.

Li said that at one point she felt that “every cell of my body was dying.”

She also saw lives perish around her. A female practitioner died of suffocation after the police sealed her mouth with tape to prevent her from shouting out the words “Falun Dafa is good.”

“You don’t know if your life will still exist in the next moment,” Li said.

But one thought kept Li’s spirits alive: She wanted to be a witness to the suffering inflicted on her and others—and tell it to the world.

“In the future, I will report your [the Chinese Communist Party’s] crimes to the U.N.,” Li told herself.

Some kindhearted people also gave her support during her time in detention, Li recalled. She once received a note from a unit leader at Masanjia that said, “Please cherish what you have.”

Li fulfilled her pledge when she fled to the United States in July 2016. Two weeks after she arrived, she stood in front of the Chinese consulate in New York to commemorate the anniversary of the persecution and celebrate a new sense of security.

Li said that she hoped her story could inspire more people to realize the extent of the brutality and bring the persecution campaign to an end.

“The U.S. government and people, as well as all who believe in principles, I entreat you to help us [so that one day we can] come back to our homeland.

“With these people practicing truthfulness, compassion, and forbearance, the world will become a better place.”