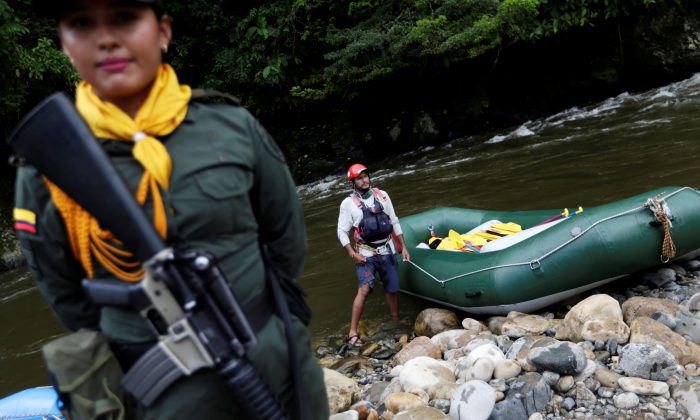 The former guerrillas from the Revolutionary Armed Forces of Colombia (FARC) have chosen rafting as their path to reintegration, as the government pushes to make tourism a top engine of the Andean nation’s economy.

“During the conflict, this region was rough, there were bullets and bombs all the time. Today, so much has changed—many people come to see the waterfalls, the mountain, the river,” guide Duberney Moreno, 34, a 13-year veteran of the FARC, said on Nov. 9.

Nearly 13,000 former combatants and their unarmed sympathizers are participating in a reintegration process agreed as part of a 2016 peace deal to end more than 52 years of war with the government.

Reincorporation is considered fundamental to ensuring former FARC members do not return to the battlefield with smaller rebel group the National Liberation Army (ELN), numerous crime gangs and dissident groups that refused to demobilize.

The conflict in Colombia has killed more than 260,000 people and millions more have been displaced, suffered sexual violence or been maimed by landmines or bombs.

Implementation of the polarizing deal has advanced slowly, but the FARC is now a political party with 10 guaranteed seats in Congress through 2026.

Many former fighters have returned home to reunite with their families, but some 5,000 have remained in 24 demobilization zones like the one on the Pato, turning them into makeshift towns built on Marxist principles.

The government has budgeted some $1.6 million to help those in the zones, which are protected by government forces, start some 300 farming, ranching, shoemaking, fishery, woodworking, and now tourism projects.

Many ex-combatants, most of whom come from poor, rural backgrounds, have also contributed the money they were given upon demobilization to the projects.

Moreno and eight other former fighters got 200 hours of guide training and are now certified by the International Rafting Federation.

“We have to keep supporting these initiatives—they create confidence in the peace process,” said Jessica Faieta, deputy chief of the United Nations’ mission in Colombia, which helps manage reintegration.

President Ivan Duque, who took office in August, has said tourism could be the country’s new economic driver.

Travel to Colombia has spiked in recent years, as stereotypes about violence are offset by positive media coverage of the country’s diverse destinations.

“I want tourism to be Colombia’s new oil and for it to be the great invigorator of economic activity,” Duque said at a recent event.

More than 3.3 million tourists visited Colombia in 2017, a 23.9 percent jump from 2016. Figures from the past two years were more than double rates in 2010 and before, when just 1.4 million people visited.

The government estimates tourism has the potential to generate $6 billion annually and some 300,000 jobs.

Colombia has coastline on both the Caribbean and the Pacific Ocean, Amazonian jungle, Andean glaciers, and cosmopolitan urban areas, as well as a plethora of adventure sports and wildlife.

Moreno and his colleagues are optimistic about their future on the river.

“We want peace,” Moreno said, standing on a beach along the Pato in the suffocating heat. “We believe a different Colombia is possible.”