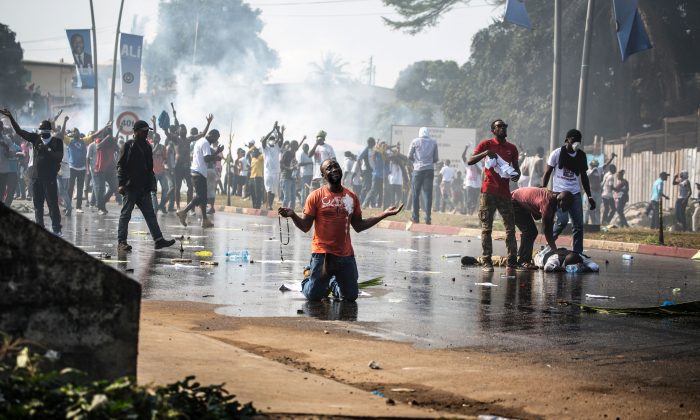 A supporter of Gabonese opposition leader Jean Ping prays in front of security forces blocking a demonstration trying to reach the electoral commission in Libreville, Gabon, on Aug. 31, 2016, as another protestor lays on the ground in distress. Ali Bongo Ondimba won the election by a very narrow margin, a result hotly contested by the opposition. (Marco Longari/AFP/Getty Images)
Opinion

From Gabon to Zimbabwe, African Presidents Are Under Siege

It’s sometimes democracy as we know it—albeit with twists and turns—but there is certainly a new appetite for political pluralism developing in Africa. This sometimes leads not only to change, but to deep division.

In Gabon, the Bongo family’s father-and-son dynasty faced a challenge as never before. The Bongos have ruled the oil-rich country for almost 50 years, all the while distributing economic benefits grotesquely unevenly. This year’s election was hotly contested; despite all indications in the exit polls, and after a protracted count of just a few hundred thousand votes, the incumbent Ali Bongo was eventually declared the winner.

The aftermath has been deeply ugly, with the opposition’s headquarters in flames. Jean Ping, whom Bongo narrowly defeated, has claimed that a presidential guard helicopter bombed the building, killing two people.

A new appetite for political pluralism is developing in Africa. This sometimes leads not only to change, but to deep division.

Perhaps this is a preview of what might eventually befall Zimbabwe, where Robert Mugabe’s autocratic, gerontocratic apparatus is apparently cemented in place. The electorate must wait till 2018 if they want to vote it out, but suddenly, street demonstrations have been ramping up, with tear gas-armed riot police doubling down on the state’s suppression.

Sadly, the demonstrators have no political program to regenerate the economy, and the country’s array of 18 opposition parties has no actual fiscal plans or policies either.

The anti-Robert Mugabe parties boast two political titans: Morgan Tsvangirai, a longtime opposition leader and onetime prime minister, and Joice Mujuru, liberation hero, former ZANU-PF stalwart and onetime national vice president. The two have never been enemies, but neither of them is much of a technocrat, and if either or both somehow got the chance to form a reasonable government, they would still be looking for some sort of salvation from the outside world.

All the while, the people of Zimbabwe still have to wait until 2018 for a chance to vote even for that—unless a brooding army, possibly also about to run out of money, makes a move first.

If it did so, it would probably be in support not of the opposition, but of one faction or another within ZANU-PF. And depending on how much leverage the younger officers had, that could force a long-overdue generation jump in political leadership.

In South Africa, meanwhile, a hotly anticipated round of municipal elections was in its own way stunning, if not as stunning as opposition strategists had hoped.

The Democratic Alliance (DA) finally broke out of its established stronghold in the Western Cape, but it could not command absolute majorities in key cities. In Johannesburg especially, the new DA mayor owes his place to the hard-left Economic Freedom Fighters (EFF), who have chosen to vote with the DA as the lesser of two evils—the other being the ANC and its benighted president, Jacob Zuma.

As if determined not to learn anything from his party’s hugely symbolic losses, Zuma has been going about his singularly dodgy brand of business as usual. The latest ploy is a push to undermine his minister of finance, Pravin Gordhan. Gordhan seems destined to be hit with corruption charges, but there is a widely held view that these are only being leveled because Gordhan will not allow Zuma himself corrupt free rein.

The last time Zuma played with appointments to the finance portfolio, the rand lost huge value overnight. It seems he does not learn either from electoral defeat or from economic reality. Or he may simply be working on the assumption that the DA and the EFF, hardly ideological bedfellows, will find it hard to keep up their cooperation and the ANC will continue as before—especially as it continues to command the countryside.

The next elections will be in 2019. Constitutionally, Zuma cannot stand again; but his former wife, African Union Chairperson Nkosazana Dlamini-Zuma, might make a bid to succeed him—just as in Zimbabwe, where rumors persist that Grace Mugabe may in some way become her husband’s successor.

Given that the free world may soon be led once again by the house of Clinton, this is far from sinister in itself—except that these two women’s ascent to the top would primarily function to preserve their husbands’ reputations and power bases.

All the while, corruption has also been on the up in Zambia, where the economy has slumped after a bubble in copper prices burst. The elections of August very narrowly re-elected Edgar Lungu, but the results are now being challenged in the constitutional court. At time of writing, Sept. 2, the country has no government.

The slowness of the electoral commission’s count, and the refusal to allow observers to witness the centralized verification process, have led to a huge raft of suspicions in what was always going to be an edge-of-the-seat race.

But whoever is finally declared the winner, Zambia is now split in two. The east and the north voted for Lungu; the south, west, and northwest voted for his rival, Hakainde Hichilema. And whoever is eventually declared the official winner won’t just have to unite a divided electorate; he will have to grapple with a “rescue package” from the IMF, hardly a harbinger of better times for ordinary Zambians.

Much was made of God’s will in the Zambian elections, but God is unlikely to bail the country out—just as the outside world will not bail out Mugabe’s Zimbabwe, and just as the markets will lose confidence in the rand again if Zuma gets his way with his finance minister.

Looking across the continent, the problem is all too familiar. In Gabon as in Zambia, the technocratic candidates were suspiciously unsuccessful. Zimbabwe has abandoned technocracy and functional government for the foreseeable future, and South Africa, once a beacon of relative affluence and good governance, has been laid low by brazen infighting and patronage.