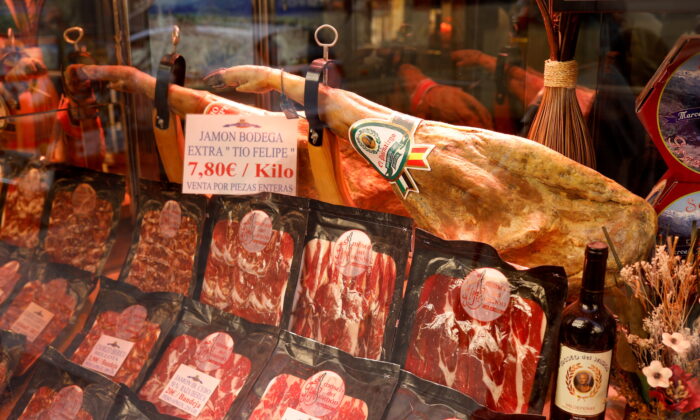 MADRID/HAMBURG—When he was a child in Avila province, Albert Pascual’s father bought 100 pigs, but the company he now leads has more than 9,000—part of a major expansion that has put Spain on track to take over as the European Union’s top pork producer this year.

“My father sold pigs at a time, in the 1990s, when this sector practically did not exist. Now we [Spain] are a world power, we have grown a lot and our company has grown in parallel to the development and growth of this sector,” Pascual said.

Germany has long topped the table of EU pork producers, but an outbreak of African Swine Fever (ASF) in September 2020 among wild boars meant it lost access to the lucrative Chinese market.

That has accelerated a shift in EU production towards ASF-free Spain that was already underway, helped by its less onerous regulations in areas such as planning and use of manure.

China is by far the largest export market for EU pig products, accounting for about 56 percent of sales so far in 2021, according to European Commission data.

The country’s appetite for imported pork has soared following its own ASF outbreak which has ravaged its vast hog herd, the world’s largest.

“The fact that in recent years it [China] has been affected by African swine fever has caused demand to skyrocket,” said Ramon Soler Ciurana, export manager of Faccsa-Prolongo, a pork producer in Malaga in the south of Spain that is expanding its pork packaging and freezing facilities.

Exports have remained high this year and totaled 1.86 million from January to July, down just 0.1 percent from a strong 2020, EU data show.

“It is taken for granted in the industry that China, no matter how hard it runs or tries to find alternatives, will not be able to get back to normality within four years,” Soler said.

Germany’s export woes, however, have only accelerated a trend that has been developing for years.

Spain’s pigmeat production totaled 2.60 million tons during the first six months of 2021, up 4.1 percent from the same period last year, according to European Commission data, and is track for an eighth consecutive annual rise.

In contrast, Germany’s pigmeat production fell by 1.3 percent to 2.52 million tons and is heading for an fifth consecutive annual fall.

The impact of ASF has been particularly severe in east Germany near the border with Poland where the disease has been found in wild boars and more recently domestic pigs. Measures such as a ban on breeding piglets have been imposed and some slaughterhouses have been reluctant to buy pigs from the region.

Tougher animal welfare and environmental rules in Germany have contributed to the decline in pig farming along with falling domestic demand for the meat, linked partly to an avoidance of red meat and moves among young people to vegetarianism.

Germany has strict planning rules that have made it difficult for the industry to adapt to animal welfare legislation related to issues such as the use of sow stalls.

“Even if German farmers want to invest in new pig stalls, they often cannot get planning approval from local authorities,” said Andre Vielstaedte, a spokesperson for Toennies, Germany’s largest slaughterhouse and meatpacking group.

In part of Germany, restrictions have also been imposed on the use of manure, linked to concerns about high ammonia concentration in the air.

Spanish pig farmers, in contrast, benefit from strong demand for slurry, a natural fertilizer made from manure and water, as soils in much of the country have become depleted and lack sufficient organic matter.

Toennies is among those investing in Spain.

The company, based in Rheda-Wiedenbrück in the west of Germany, is building a meat packing and slaughterhouse plant in Calamocha in Spain, costing about 75 million euros ($87 million).

Operations will start in 2023 and the plant will slaughter 2.4 million animals a year, with up to 1,000 jobs created.

“The pork market in Spain is looking attractive and the political framework is positive,” said Toennies’ Vielstaedte.

“Our new Spanish plant will be aimed exclusively at exports to markets including pork ribs to North America, bellies to Japan, and other products such as pigs’ feet and ears to China and elsewhere in Asia.”

Vielstaedte said Germany remained the company’s “core market,” but ASF was just one factor making it less attractive for pig farming and the international marketing of pork.

“We have a one sided regulatory burden … as animal welfare and protecting the environment create extra costs and need new investment, but which are often not faced by farmers in other countries,” he said.

China has continued to report outbreaks of ASF this year, including in three of the top five pork producing areas, Henan, Sichuan, and Shandong, with imports set to remain high in 2022.

Prior to its own ASF outbreak, however, China was only importing 1.5–2.0 million tons of pork a year and industry sources expect imports to eventually slow as its herd is rebuilt.

“This is one of the great challenges we face,” Soler said.

“Obviously the Chinese market will return to normal sooner or later and we will return to pre-crisis figures. The objective of maintaining the level of production will depend on our capacity to open new markets.”