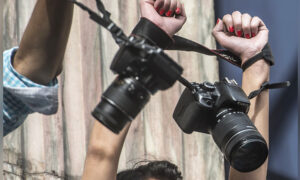 Worst Jailers: China Tops the List With the Highest Number of Journalists Detained
0

Frightened! CCP Arrests Another Journalist After Live Streaming What Life Was Like in Wuhan

Republican lawmakers have invoked the Global Magnitsky Act to call for sanctions against top Chinese officials on their handling of the new coronavirus. The letter was sent by Jim Banks, Dan Crenshaw, and Lance Gooden to Treasury Secretary Steven Mnuchin and Secretary of State Mike Pompeo. It calls out the officials not just for their handling of the virus, but also for human rights abuses of Chinese ethnic minorities.

They state, “We write to you today regarding the Chinese Communist Party’s duplicitous, ineffective, and cruel response to the outbreak of COVID-19. We believe their actions violated the 2005 International Health Regulations, the human rights of their citizens, and basic principles of fairness and responsibility in international relations.”

And Chinese authorities have continued their coverup of the virus by arresting a fourth known citizen journalist amid the virus outbreak. The individual was allegedly detained after live streaming videos showing the situation in Wuhan during the height of the lockdown.