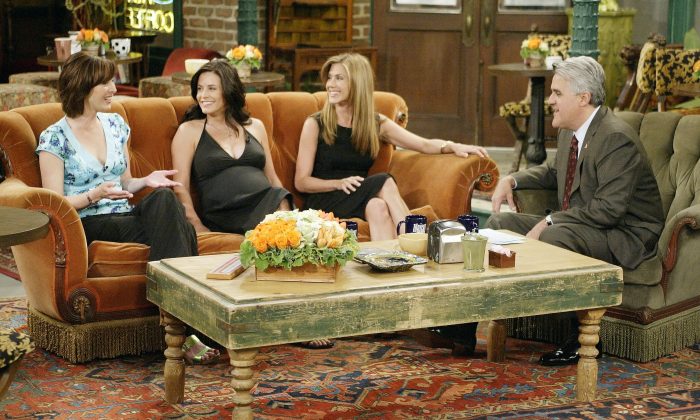 "Let me tell you something: there's six friends and I've been trying to put togIn this handout photo provided by NBC, actresses Lisa Kudrow, Courteney Cox-Arquette and Jennifer Aniston sat down with Jay Leno for a special 'Tonight Show' on May 6, 2004 in Los Angeles, California. (Photo by Paul Drinkwater/NBC via Getty Images)
Entertainment

The three female stars of Friends–Jennifer Aniston, Lisa Kudrow, and Courteney Cox–have basically agreed to a reunion movie, according to a new tabloid report.

Aniston, Kudrow, and Cox were dining together at the Sunset Tower Hotel in Los Angeles when they “toasted” the project, according to Star Magazine.

Sources said that a $5 million contract for each cast member is possible.

One insider, though, told the magazine that David Schwimmer is not too thrilled about the idea.

“He has had a hard time moving on from the show and has a new career as a director, but it’s a lot of cash and he knows the 20th anniversary is the time to do it,” the source said.

At the same time, Gossip Cop spoke to a representative for Aniston, who said the story is “not true.”

Rumors about a Friends reunion have been going around for some time, including for many months earlier this year.

One stemmed from a poster that claimed the show would have a reunion on Thanksgiving.

The most concrete information to come out lately came from Kudrow, who said during a Reddit question-and-answer session that she would “go for” a reunion if one happened.

Kudrow responded to a question about what she would prefer–a movie, a single episode, or an entire season.

“A whole season, because to spend that much time with those people again would be heaven!” she said.

She also noted that she would have enjoyed it if the show had gone on longer.

“I loved doing Friends. I would have been fine if we did it 10 more years, and it was great that we finished when we did, because I’ve loved everything I’ve done since,” she said.

Kudrow, Aniston, and Cox got together earlier this year on Jimmy Kimmel Live but Aniston said that a full reunion would be difficult.

“Let me tell you something: there’s six friends and I’ve been trying to put together a cast dinner for 10 years. It doesn’t happen!” she said.

“I can get the girls to come, maybe Matthew Perry.”