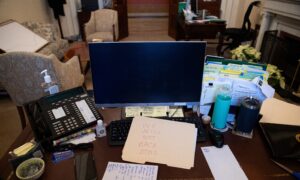 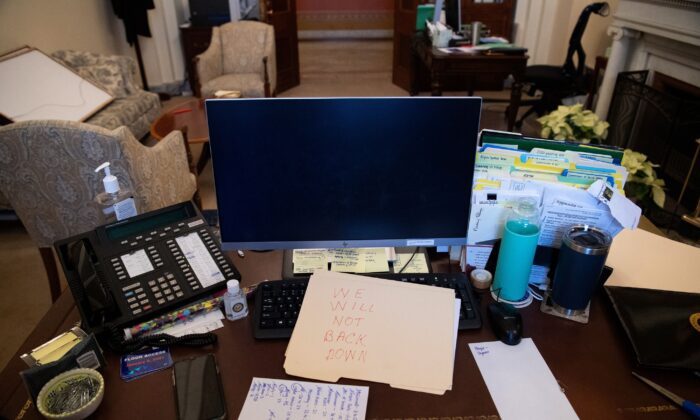 A tipster claiming that a Pennsylvania woman stole House Speaker Nancy Pelosi’s (D-Calif.) laptop computer with plans to sell it to Russia is the woman’s abusive ex-boyfriend, according to her lawyer and a friend who was with the woman on Jan. 6.

“The whole story has been orchestrated by her abusive ex-boyfriend who currently has a [protection from abuse order] against him,” Cy Sanders, who traveled to Washington with Riley June Williams, told The Epoch Times via email.

Williams left her house, changed her phone number, and closed her social media accounts because she was trying to escape from the man, Ulrich said.

The FBI disclosed in a court document on Jan. 17 that it was probing the allegation that Williams, 22, stole a laptop from Pelosi’s office in the U.S. Capitol during the Jan. 6 breach of the building. The bureau cited a former romantic partner of Williams, who claimed to have been shown video of her taking a computer or hard drive from the House speaker’s office. No evidence of the alleged theft was provided in the criminal complaint or an attached affidavit.

A Pelosi aide has said a computer was stolen from her office, but that it was only used for presentations. Pelosi has addressed the issue, saying she’s “not concerned about that particular laptop.”

Sanders relayed to The Epoch Times that the former romantic partner is himself Russian. The man has been stalking Williams and has a protective order against him, he added.

“He pretty much gassed this whole thing up. He went through videotapes and sent all kinds of stuff that FBI or wherever else, because he’s smarting. He’s mad, and that’s what’s created this whole frenzy against her,” Sanders said. An attempt to contact the former romantic partner wasn’t successful.

Sanders traveled with Williams and her father to Washington. Williams at one point separated from them and entered the Capitol, he said. When she returned, she clearly didn’t have a laptop with her, Sanders said.

Video from the storming of the Capitol shows a woman matching Williams’s description exhorting protesters to go “upstairs, upstairs, upstairs” during the attack, which briefly disrupted the certification of President Joe Biden’s electoral victory.

Williams, who has no criminal record, is facing charges of theft, obstruction, and trespassing, as well as violent entry and disorderly conduct on Capitol grounds.

In adding the theft-related charges on Jan. 19, a Virginia-based FBI agent said Williams was recorded on closed-circuit cameras in the Capitol going into and coming out of Pelosi’s office. The agent’s affidavit said a cellphone video that was likely shot by Williams shows a man’s gloved hand lifting an HP laptop from a table, and the caption reads, “they got the laptop.”

During a Jan. 21 court hearing, Carlson, the judge, told Williams: “The gravity of these offenses is great. It cannot be overstated.”

He ordered her released into the custody of her mother, with travel restrictions, and instructed her to appear Jan. 25 in federal court in Washington to continue her case.