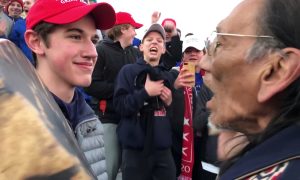 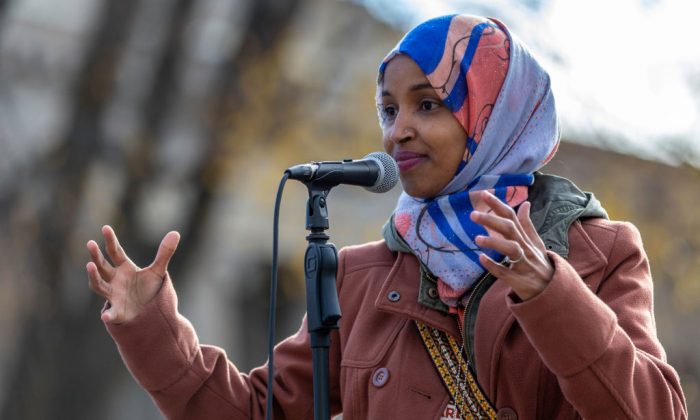 A national lawmaker quietly deleted an inaccurate tweet after leaving it up for hours, accumulating tens of thousands of views.

Rep. Ilhan Omar (D-Minn.), one of the first Muslim lawmakers in the United States, posted on Twitter on Jan. 22, asserting several disproven allegations against Covington Catholic High School students, who were subject to a smear campaign by a number of media outlets.

Citing far-left media outlet Rewire News, Omar stated that the Covington students yelled a rape joke at a group of girls nearby. However, the one student who was caught on video shouting the apparent joke was not from Covington, students said. A number of students from other schools were also gathered in Washington on Jan. 18.

Omar continued by claiming, falsely, that the students “were taunting 5 black men before they surrounded [Nathan] Phillips and led racist chants.”

A group of Black Hebrew Israelites, a militant black supremacist group, spent about an hour hurling obscenities at the group of students, calling them a range of names, many of them unprintable. The students, instead of responding directly, broke into school spirit chants.

That’s when Phillips, a Native American activist, approached the group and got in the face of one student, later self-identified as Nick Sandmann, a junior at Covington, as another Native American told the students to “go back to Europe.”

A Black Hebrew Israelite several days after the incident kept calling the students names, saying “they sounded like dogs.”

Phillips later said do the Detriot Free Press, about the fringe religious group: “They were saying some harsh things, but some of it was true, too.” The comment was later removed from the article.

The third part of Omar’s tweet referred to the family of Sandmann hiring a public relations firm after he was attacked by the New York Times, Washington Post, and a number of other media outlets based on an edited video. When the outlets got around to watching the full video, most backtracked on their initial claims, which also relied on Phillips’s word. For instance, the activist said that the students chanted “Build the wall,” while video footage does not show them engaging in that chant.

Sandmann said in a statement after the onslaught of negative press that he and his family had been threatened.

“I have received physical and death threats via social media, as well as hateful insults. One person threatened to harm me at school, and one person claims to live in my neighborhood. My parents are receiving death and professional threats because of the social media mob that has formed over this issue,” Sandmann said. “I am being called every name in the book, including a racist, and I will not stand for this mob-like character assassination of my family’s name. My parents were not on the trip, and I strive to represent my family in a respectful way in all public settings.”

Omar, an anti-Israel lawmaker, didn’t initially explain why she deleted the tweet, and another post that blames the incident on high school students is still on her timeline.

Later, when a conservative commenter shared a screenshot of her deleted tweet, Omar grew incensed, calling him a “hypocrite” while admitting that the issue with her tweet may have been “misinformation.”

These tweets by Ilhan Omar have been deleted: pic.twitter.com/GPLRk36umH

Omar was not the only lawmaker to spread misleading and inaccurate claims about the contentious incident.

On the other hand, some lawmakers defended the students and said the rush to report on events led to mistakes.

“When the rush for headlines take precedence over the facts, mistakes are made and our rights as Americans are put at risk,” Senate Majority Leader Mitch McConnell (R-Ky.) said on the Senate floor on Wednesday.

Because of widespread inaccurate reporting and threats against the students, a lawyer representing the students’ families said they may pursue a libel lawsuit against those who unfairly disparaged the students, especially those who didn’t retract their comments.

Closed because of security concerns about a number of death threats against students, Covington re-opened on Wednesday with heightened security in place.

Five police cruisers were stationed at the two entrances to the school, reported the Cincinnati Enquirer, as officers said a number of threats are currently under investigation.

A letter from school officials told parents that if they didn’t feel comfortable sending their sons back to class at the all-male school, they will “understand this viewpoint during this difficult time period.”

Sandmann and other students have detailed the threats made against them.

“We’ve been getting school shooting threats, school bomb threats, vandalism of our buildings, people have gone out and said they’re going to slash our tires and break our school windows,” one student told The Daily Wire.” We’ve have threats saying that it’s best if the students at CovCat are locked in the school and set on fire. We’ve had tweets saying that we should be raped by clergy members. We’ve had every sort of threat that we should be thrown in woodchippers.”