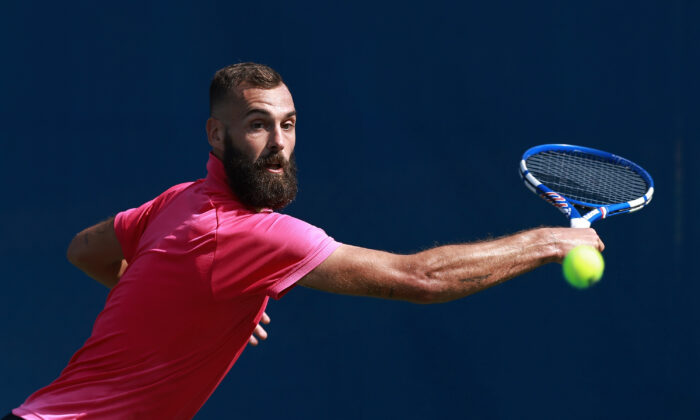 French tennis player Benoit Paire has tested positive for COVID-19 just weeks before the Australian Open gets underway on Jan. 17, 2022.

The sportsman, 32, revealed on Wednesday that he had contracted the CCP (Chinese Communist Party) virus, which causes COVID-19, and admitted regular quarantining had taken a toll on his mental health.

“Hey my name is Benoit Paire, and for the 250th time I tested positive for Covid!!” he said on Twitter. “Honestly I can’t deal with this Covid s*** anymore.”

“How am I doing? Because of Covid, I got a runny nose but because of all these quarantines spent in a hotel room halfway across the world, I don’t feel good mentally,” he continued. “Last year was tough, and this year starts exactly the same way!!”

Paire, who is vaccinated, added that he is “100 percent for the vaccine,” but urged people to “just live as before Covid, otherwise, I don’t see the point.”

Paire is the second player to test positive for COVID-19 among the arrivals in Australia this week after Denis Shapovalov announced that he had tested positive in Sydney.

“I am following all protocols, including isolation and letting the people who I’ve been in contact with know,” Shapovalov announced in an Instagram post last week. “Right now I am experiencing minor symptoms and look forward to getting back on the court when it is safe to do so. Thank you in advance for your support and wish you all a safe and happy holiday.”

Other players who have tested positive in recent weeks include Rafael Nadal, Andrey Rublev, Olympic gold medalist Belinda Bencic and Ons Jabeur. Meanwhile, Roger Federer and Stan Wawrinka will miss the Australian Open due to injuries.

Paire was ruled out of the 2020 U.S. Open after testing positive for COVID-19 just days before his first match. He was placed in isolation for two weeks, meaning he was unable to play. After leaving isolation, he tested negative for the virus but then tested positive again two weeks later at the ATP tournament at Hamburg, Rothenbaum.

However, he was allowed to play because the positive result was due to a prior infection of the virus.

In a statement at the time, Hamburg officials explained why the tennis star was permitted to remain in the event.

“According to tournament doctor Dr. Volker Carrero, it is not uncommon that three weeks after a positive result, fragments of the virus can still be found inside the body,” officials said. “Paire has not shown any symptoms of disease and has not been contagious at any time. Local health authorities in Hamburg made the decision on Saturday that Paire is allowed to play.”

In January this year, Paire, the world No. 46, had to complete 14 days of quarantine before the Australian Open after one person on his flight to Melbourne tested positive for COVID-19.

This week, five Australian jurisdictions agreed upon a new definition for a COVID-19 “close contact,” which will ease the burden on PCR testing clinics and help keep the economy running.

Prime Minister Scott Morrison announced that from midnight of Dec. 31, New South Wales, Victoria, Queensland, South Australia, and the Australian Capital Territory will change their definition of a close contact and follow-up procedures.

“Except in exceptional circumstances, a close contact is a household contact … of a confirmed case only,” Morrison said. “A household contact is someone who lives with a case or has spent more than four hours with them in a house, accommodation, or care facility setting.”