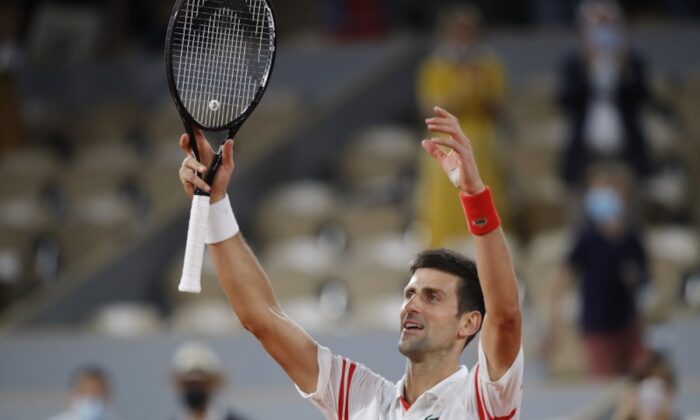 Djokovic Could Be Barred From French Open

Novak Djokovic could be barred from playing in the French Open after the French Sports Ministry stated on Jan. 17 that there would be no exemption from France’s new vaccine pass law.

Ranked as the No. 1 men’s tennis player in the world, Djokovic, who hasn’t been vaccinated against COVID-19, was deported from Australia on Jan. 16 before the first Grand Slam tournament of the year after losing a court case to have the cancellation of his visa overturned.

France’s vaccine pass law, approved by Parliament on Jan. 16, will require people to have a certificate of vaccination to enter public places such as restaurants, cafes, cinemas, and long-distance trains.

“The rule is simple. The vaccine pass will be imposed, as soon as the law is promulgated, in establishments that were already subject to the health pass,” the ministry stated. “This will apply to everyone who is a spectator or a professional sportsperson. And this until further notice.

“Now, as far as Roland-Garros is concerned, it’s in May. The situation may change between now and then and we hope that it will be more favorable. So we’ll see, but clearly there’s no exemption.”

Gilles Moretton, president of the French Tennis Federation (FFT), had said that the organization was working on welcoming “unvaccinated foreign athletes” ahead of the French Open, officially known as Roland-Garros, which is set to begin on May 22.

“Our teams are working in collaboration with the public authorities, who will specify the rules relating to the reception of unvaccinated foreign athletes for our tournament in due course,” Moretton told Agence France-Presse (AFP).

Though the rules are yet to be finalized, French Sports Minister Roxana Maracineanu suggested earlier this month that a “health bubble” could be created that would allow unvaccinated players to play the Grand Slam tournament in Paris.

Maracineanu told AFP on Jan. 7 that Djokovic could well be granted entry to France for the French Open, even if he remains unvaccinated against COVID-19.

“There are health protocols imposed for major events by the relevant federations, which would permit someone like Novak Djokovic to enter the country,” she said. “In France today we do not have the same regulations as Australia for entry to the country, either for athletes or any citizens from other countries.

“An athlete who is unvaccinated can compete in an event because the protocol, the health bubble for these major events, permits that.”

Maracineanu noted that she hoped that the situation would be clearer by the time the event is scheduled to get underway in May.

“We hope there will be no need for such measures by then,” she said.

The announcement comes after Djokovic’s visa was canceled by Australian Immigration Minister Alex Hawke on Jan. 14.

Hawke used his discretionary ministerial power “under section 133C (3) of the Migration Act” to cancel the tennis star’s visa on the grounds of health and good order, saying that it was in the public interest to do so.

The decision came after days of speculation as to whether Djokovic would be allowed to compete in the Australian Open tennis tournament because he’s unvaccinated against COVID-19.

Djokovic contended that he should be allowed to stay in the country and compete under a medical exemption from the vaccination because he had tested positive for the virus in December. The exemption had originally been granted by Tennis Australia and the Victorian government.

But Australia, which has some of the strictest COVID-19 vaccination border entry requirements in the world, subsequently canceled his visa after he landed at Melbourne airport on Jan. 6.

“The ABF [Austrailian Border Force] can confirm that Mr. Djokovic failed to provide appropriate evidence to meet the entry requirements to Australia, and his visa has been subsequently canceled,” the ABF said in a Jan. 6 statement.

The Serbian player was taken to immigration detention, but was released on Jan. 11 after federal judge Anthony Kelly reinstated his visa, saying that the cancellation was “unreasonable” because he hadn’t been given enough time to respond to officials.

However, the situation ultimately resulted in Australia’s immigration minister revoking his visa last week. It isn’t known if Djokovic, who flew home to his native Serbia on Jan. 17, will contest the minister’s decision.