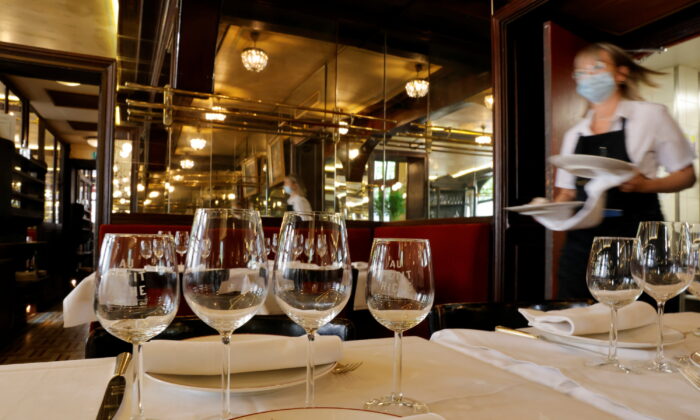 A waiter serves dishes in a dining room at Au Petit Riche restaurant in Paris as cafes, bars and restaurants reopen indoor dining rooms with a fitted gauge and health protocol after closing down for months amid the COVID-19 outbreak on June 9, 2021. (Pascal Rossignol/Reuters)
Economy

PARIS—Growth in France’s services sector weakened by less than initially expected in July, yet inflationary pressures were likely to weigh in the near-term on the euro zone’s second-biggest economy, a monthly survey showed on Wednesday.

Data compiler S&P Global Market Intelligence said its final purchasing managers index for services fell in July to 53.2 points from 53.9 in June, although the final figure was higher than a flash forecast reading of 52.1 points for July.

Readings above 50.0 denote an expansion in activity.

S&P Global Market Intelligence’s overall composite PMI index, which includes the services and manufacturing sectors, fell to 51.7 points in July from 52.5 in June. The flash composite PMI figure for July had stood at 50.6 points.

Preliminary data published last Friday showed French inflation for July at 6.8 percent, while inflation across the euro zone accelerated to a record high of 8.9 percent from June’s 8.6 percent.

“The outlook for the French economy has been clouded further this past week as risks of an energy supply crisis in Europe grow. Coupled with rising interest rates and stubbornly high inflation, it’s difficult to foresee the French economy breaking out of its current downward trajectory,” said Joe Hayes, senior economist at S&P Global Market Intelligence.