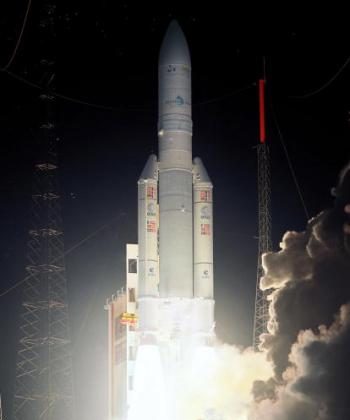 Peter Sedik
View profile
Follow
biggersmaller
Print
France postponed the launch of its military spy satellite due to a technical problem, which forced the stop of the final countdown on Wednesday morning.

The 151-foot-tall Ariane 5 rocket carrying the satellite was set to launch from the base in French Guiana, France's overseas department off the northern coast of South America.

The problem was caused by "an anomaly in a helium pressure system valve," said Le Gall, president of Arianespace, the first commercial space transportation company founded in France. He added that it will need to be "inspected and replaced."

The spaceport is operated by the European Space Agency, an 18-member organization established for space exploration.

The Helios 2 B satellite is a next-generation observation system developed by France in cooperation with Belgium, Spain, Italy, and Greece, and weighs an estimated 9,260 pounds. Its optical and infrared imaging systems can map the Earth's surface and military targets.

Two other Helios satellites—which already operate in space—have been used during military actions in Kosovo, Lebanon, Afghanistan, Chad, and Darfur.

Launching another spy satellite is meant to strengthen France’s military intelligence as well as demonstrate independence from the U.S. in the field of military espionage.