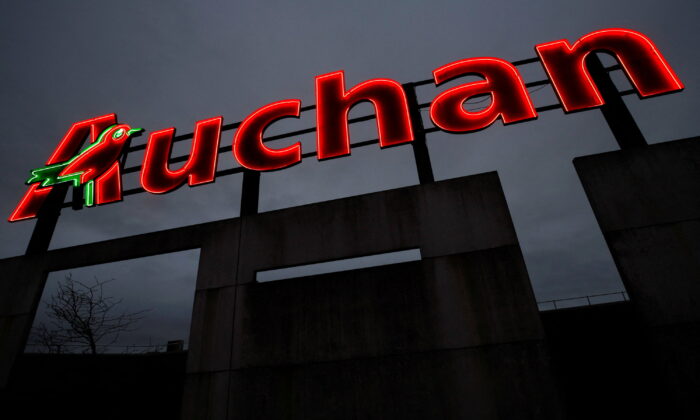 The CEO of privately-owned French supermarket chain Auchan said March 27 the company plans to maintain its presence in Russia, despite Ukrainian President Volodymyr Zelenskyy claiming that French companies still operating in the neighboring country are “sponsoring the Russian war machine.”

In an interview published in the French newspaper Journal du Dimanche, CEO Yves Claude said the grocery chain’s decision to continue operations in Russia was a “human” one.

Auchan Retail has had a presence in Russia for 20 years and employs nearly 30,000 workers there, of which 40 percent are shareholders in the company.

Claude said he feared that if the company were to pull the plug on its operations in Russia, it could deprive employees of income or risk exposing local managers to potential legal issues.

The company will also remain in Ukraine, Claude said, where it has 43 supermarkets and about 6,000 workers who Claude said manage to “find solutions” to the ongoing conflict and “do not want us to close” despite them operating under “extreme conditions” in regions hit by the war.

“The most important in our eyes is to maintain our employees and ensure our primary mission, which is to continue feeding the populations of these two countries,” Claude said.

“It is easy to criticize us, but we are here,” Claude added.

While Auchan has no plans to leave Russia for now, Claude said he does not expect business in the country to be profitable this year. The Russian market generated 3.2 billion euros ($3.51 billion) in revenue in 2021, representing 10 percent of total revenue at Auchan Retail.

“Leaving would be imaginable from an economic point of view but not from a human point of view,” Claude said.

During a 15-minute video address to the French parliament on March 23, Zelenskyy urged French companies to “quit the Russian market.”

“Renault, Auchan, Leroy Merlin, and others must stop sponsoring the Russian war machine,” Zelenskyy said. “All companies must remember once and for all that values are worth more than profit, especially profit on blood.”

“Apparently, job losses in Russia are more important than the loss of life in Ukraine,” Kuleba wrote on Twitter. “If Auchan ignores 139 Ukrainian children murdered during this month of Russian invasion, let us ignore Auchan and all their products,” he said while calling for a boycott of the companies.

Last week, Renault Group announced it was suspending operations at its Moscow manufacturing plant as of March 23 amid international pressure and the threat of a boycott.

The company also downgraded its financial outlook, saying it was looking at a “group operating margin of around 3 percent versus at least 4 percent previously” following the suspension.