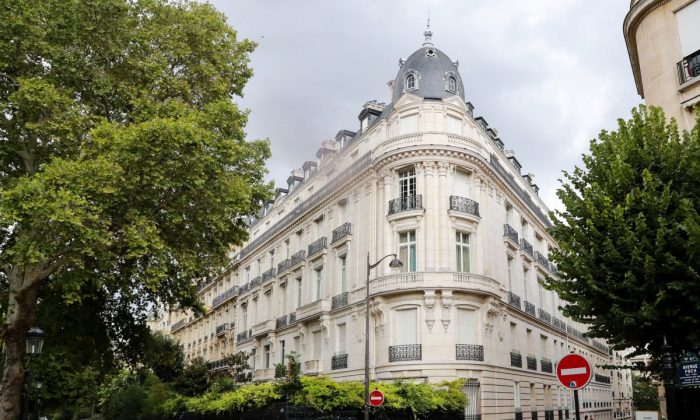 An apartment building owned by Jeffrey Epstein in the 16th arrondissement of Paris, on Aug. 12, 2019. (Jacques Demarthon/AFP/Getty Images)
Europe

Authorities in France have searched the Paris apartment of deceased sex offender Jeffrey Epstein as well as the home and offices of one his acquaintances, French modeling agent Jean-Luc Brunel, as part of their probe into his alleged sex trafficking crimes.

Over the past week, investigators carried out searches at Karin Models, an agency in the high-end 8th arrondissement of Paris, and at Brunel’s Paris home, the city’s prosecutor’s office announced on Sept. 24. The office didn’t provide any additional details about the current status of the French investigation.

Karin Models was set up by Brunel, who was named in an August court filing as having been an acquaintance of Epstein. The agency didn’t immediately respond to a request for comment from The Epoch Times.

Brunel also founded MC2, a modeling agency based in Miami, which he reportedly created with financial help from Epstein. MC2 didn’t respond to a previous request for comment from The Epoch Times, but told The Guardian in August that it denied any connection to Epstein’s crimes. The agency also stated that Brunel, who has previously denied any wrongdoing, was no longer actively working at the company.

Brunel was a frequent companion of Epstein who flew on his plane and visited him in jail in Florida, according to U.S. legal records. Epstein pleaded guilty in Florida in 2008 to state charges of soliciting a child for prostitution under a nonprosecution agreement that required him to spend 13 months in jail and register as a sex offender.

An unidentified source from the Paris prosecutor’s office told Reuters that the search of Epstein’s apartment has since concluded, confirming an earlier report from France Info radio.

Epstein had a residence on Avenue Foch in Paris, one of the city’s most exclusive addresses in the 16th District near the Arc de Triomphe, a famous monument. When Epstein was arrested in July in New Jersey, he had landed on a flight from Paris.

Martin Weinberg, one of Epstein’s lawyers, didn’t immediately respond to a request for comment from The Epoch Times on the French searches.

Earlier this month, investigators said they had interviewed three alleged victims of Epstein who had come forward. French authorities are launching an appeal for anyone involved in Epstein’s alleged trafficking ring to contact them.

The French investigation is broadly probing possible charges of rape of minors 15 and older, sexual aggression, and criminal association; prosecutors haven’t yet named any suspects. The aim is to uncover any infractions in France as well as on any French victims abroad and to determine whether any French citizens were linked to crimes.

Prosecutors in New York noted that Epstein maintained a number of “luxury properties and residences around the world.”

Epstein was awaiting trial on sex trafficking charges in a Manhattan jail when he was found dead in his cell on Aug. 10 at the age of 66. He had pleaded not guilty to the trafficking charges involving dozens of underage girls, some as young as 14. His death was ruled by the New York City Medical Examiner’s office as a suicide by hanging.