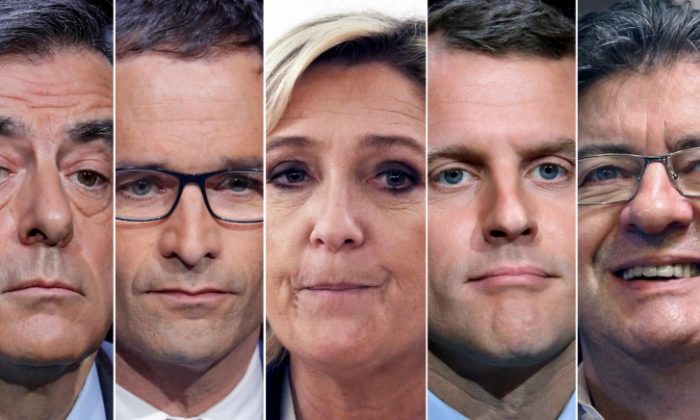 PARIS—France’s presidential race looked tighter than it has all year on Friday, nine days before voting starts, as one poll put all four main candidates within touching distance of the two-person run-off round.

The Ipsos-Sopra Sterna poll for daily Le Monde showed centrist Emmanuel Macron and National Front leader Marine Le Pen tied on 22 percent each in the April 23 first round, with the far-left’s Jean-Luc Melenchon and conservative Francois Fillon on 20 and 19 percent respectively.

That 3 percentage point gap among the top four was within the poll’s margin of error, suggesting the election is wide open.

Were he to qualify for the second round on May 7, Macron is still seen winning whoever his opponent is, but the most striking trend of the past days has been Melenchon’s sharp rise in first round voting intentions since performing well in two TV debates in late March and early April.

A second poll published on Friday showed a bigger, six-point gap separating the four main players in a first-round field of 11 candidates. The daily survey by Opinionway had Macron as leader on 23 percent and Melenchon the laggard on 17.

Melenchon’s progress is, however, worrying investors in view of his hostility to the European Union and plans to repeal pro-business labor reforms. Opinion polls show that, should he reach the second round, he could win against Fillon or Le Pen.

Polls have consistently shown that Le Pen, who is also hostile to the EU and wants to dump the euro currency, would not win the presidency whoever she faced in the run-off.

French judges investigating her alleged misuse of EU funds to pay for party assistants have asked for her parliamentary immunity to be lifted, though her legal woes have not been as harmful to her in the polls as the allegations of nepotism that have plagued Fillon’s campaign.