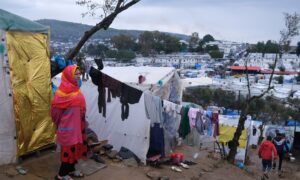 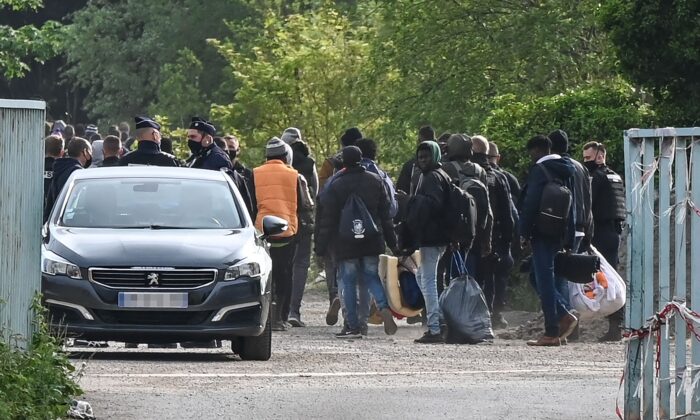 Police supervise the evacuation of a migrant camp on the road to Saint-Omer near Calais, northern France, on June 4, 2021. (Denis Charlet/AFP via Getty Images)
Europe

PARIS, France—French police dismantled a makeshift migrant camp in the northern port of Calais on Friday, removing hundreds of people in one of the biggest operations of its kind in recent months.

Since the easing of the coronavirus lockdown and the reopening of the borders within the European Union, migrants have begun to flock to Calais again, hoping to reach Britain via the Channel Tunnel.

Local authorities said the number of migrants had significantly increased in recent weeks, finding shelter in sheds and makeshift shelters in the southern part of the town.

“Several hundred migrants were identified on the premises, including about 30 children,” they said in a statement.

The operation started at around 6 a.m. with the migrants being taken to various reception centers in the region.

Authorities have repeatedly dismantled illegal campsites only for them to pop up again elsewhere within months.

Many of the migrants have fled to France from North Africa, the Middle East, and Asia, escaping countries blighted by wars and poverty.

Since the dismantling of the huge “Calais Jungle” in 2016, where up to 9,000 people lived, migrants are now scattered in several camps, most on the outskirts of Calais.