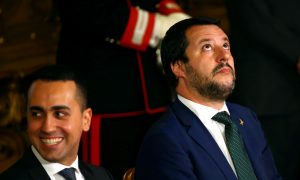 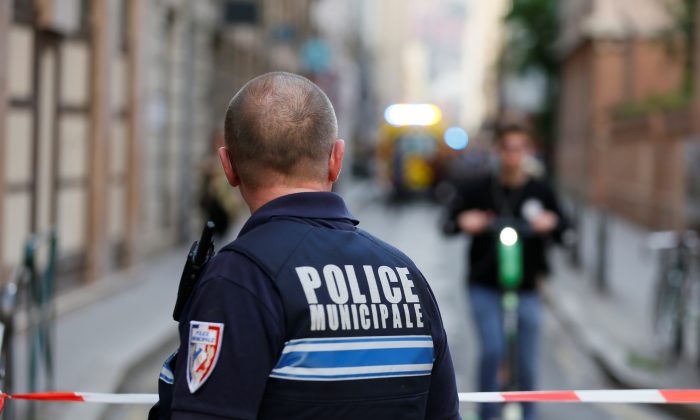 A policeman looks on near the site of a suspected bomb attack in central Lyon, France, on May 24, 2019. (Emmanuel Foudrot/Reuters)
Europe

The case is being handled as a terrorism investigation given the circumstances of the attack, committed in broad daylight, and the use of an explosive device capable of hitting a large number of people with screws and metal balls packed into a bag.

A police source said the three arrested were the student, who does not have a police record, a minor who studies at a high school in Lyon and is also of Algerian nationality, and a woman.

The Paris prosecutors’ office said that minor was a member of the main suspect’s family circle. No information was provided about the woman.

French Interior Minister Christophe Castaner also announced the arrest of the man on Twitter, but did not provide further details on the suspect or where he was arrested.

Security camera footage of the incident shows a partially masked suspect wheeling a bicycle to the scene, before leaving a bag outside a branch of a popular bakery chain.

DNA traces were found on the remains of the parcel, according to a source close to investigation.

Another source said the judicial police arrested the man on the street after having tailed him.

They decided not to arrest him at his apartment, the source said, for fear that there could still be some triacetone triperoxide or TATP, the powerful but unstable homemade explosive that was used in the attack.

President Emmanuel Macron characterized the incident as an “attack” when the news broke during a live YouTube interview ahead of Sunday’s European elections. “My thoughts are with the injured,” he said.

Police forces across France have been instructed to increase security in public places and event venues, Castaner said.

By Emmanuel Jarry and Bate Felix