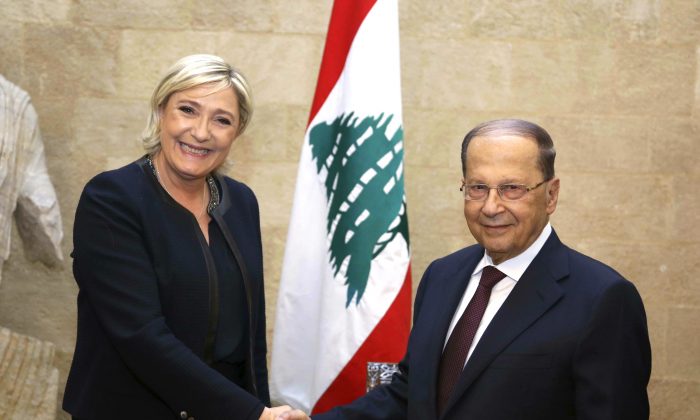 French National Front leader and presidential candidate Marine Le Pen (L) shakes hands with Lebanese President Michel Aoun, at the presidential palace, in Baabda, east Beirut, Lebanon on Feb. 20, 2017. Le Pen has arrived in Beirut to meet with the Lebanese head of state and leading Christian figures. The National Front leader is hoping to burnish her credentials as a defender of Christians in the Middle East, ahead of France's April 23 presidential elections. (Dalati Nohra via AP)
International

BEIRUT—French National Front presidential candidate Marine Le Pen tried to raise her international profile and press her pro-Syria, pro-Christian stance with a visit to Lebanon on Monday, holding her first campaign meeting with a head of state.

On the first day of her two-day visit, Le Pen called Syrian President Bashar Assad “the most reassuring solution for France” and said the best way to protect minority Christians is to “eradicate” the ISIS terrorist group preying on them—not turn them into refugees.

Lebanon, a former French protectorate, shares a large border with Syria, and has taken in some 1.2 million Syrian refugees—the equivalent of one-fourth of its own population—including Christians targeted by ISIS.

The trip represents the first major foray into foreign policy for Le Pen, a leading candidate in France’s April 23 and May 7 election. She is hoping to burnish her credentials as a defender of Christians in the Middle East, looking to win the votes of thousands of French citizens in Lebanon and have an impact on the international scene.

Le Pen has worked hard to clean up the former racist and anti-Semitic image of her party. She is running on an anti-immigration and anti-European Union platform.

She said she told Lebanese Prime Minister Saad Hariri that there is “no viable and workable solution” to the Syrian civil war beyond choosing between Assad and ISIS.

“I clearly explained that in the political picture the least bad option is the politically realistic. It appears that Bashar al Assad is evidently today the most reassuring solution for France.”

Le Pen has made known her pro-Assad position in the past, but it took on extra weight in the context of her high-profile foreign visit. Her stance represents a major divergence from official French policy and that of Hariri, who is allied with Saudi Arabia against the Syrian leader.

In the fractious politics of Lebanon, President Michel Aoun, whom Le Pen also met, supports Assad and the Iranian-backed Hezbollah working to bolster him.

An official readout of the meeting suggests that Hariri took umbrage at Le Pen’s statements about Muslims, who her followers claim are changing the Christian face of France.

“Muslims are the first victims” of terrorism, Hariri was quoted as saying in the summary of the meeting, and moderate Muslims are “the first bulwark against extremism.”

“The worst mistake would be the amalgam between Islam and Muslims on one hand and terrorism on the other hand.”

Before meeting with the prime minister, Le Pen met with Aoun, saying they agreed during the meeting that the two countries should be “pillars” in organizing the fight against Islamic fundamentalism.

During her two-day visit, Le Pen was also to meet the Christian Maronite patriarch.

Like other French politicians, she spoke out in favor of protecting the Christian minority—but stressed this should be done by annihilating the enemy—ISIS.

“The way to protect the Christian minority is to eradicate those who have a vision of destroying all the minorities.”

“For me to protect Christians is to make sure the Christians stay in their countries,” not become refugees, she said.

Le Pen said she and the prime minister, who has longstanding ties to France, agreed on “the absolute necessity” for nations wanting to fight ISIS to come “to the table,” an apparent reference to formal talks. She noted the threat to France of ISIS, which has claimed deadly attacks in Paris, Nice, and elsewhere, and has lured hundreds of French youths to the war zones in Syria and Iraq.

Lebanon’s Christians have long looked to France for security against the Middle East’s turmoil, and President Aoun spent years in exile in France.