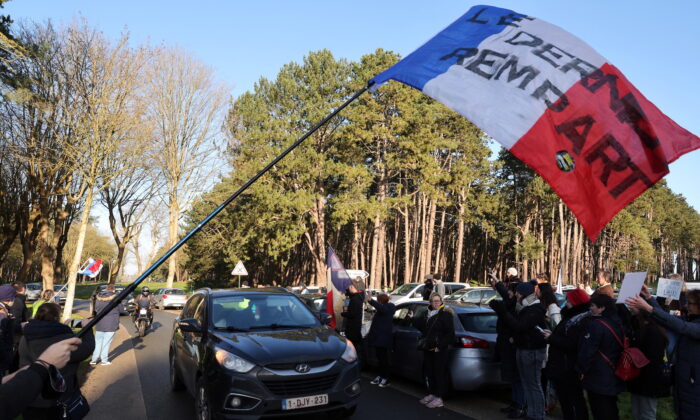 PARIS—France mobilized thousands of police, armored personnel carriers, and water cannon trucks in Paris on Friday to keep out convoys of motorists converging on the capital for a protest against COVID-19 restrictions.

Checkpoints were set up at toll points on major entry roads while riot-control barriers were erected across the city center ahead of rallies that the protesters aim to hold over the weekend.

Inspired by “Freedom Convoy” demonstrations in Canada, the motorists—from numerous cities across France—were expected to gather outside Paris and seek to defy a police order not to enter the city.

“We’ve been going around in circles for three years,” said pensioner Jean-Marie Azais, part of a “Convoie de Liberte” headed to the capital from the southwest, in reference to France’s anti-COVID-19 strategy.

“We saw the Canadians and said to ourselves, ‘It’s awesome, what they’re doing.’ In eight days, boom, something was sparked.”

As the evening rush hour got under way, police began checking drivers’ documents at various entry points into the city center. More than 7,000 officers will be mobilized over the next 72 hours.

Convoy members exchanged information via social media on how best to slip into the city, avoiding a police presence that included heavy-lifting equipment to dismantle any makeshift roadblocks.

“We have always safeguarded the right to protest … but we need harmony and we need a lot of collective goodwill,” President Emmanuel Macron told newspaper Ouest France, while urging calm.

His prime minister, Jean Castex, was more blunt. Citizens had the right to protest but not gridlock the capital, he said.

The Canadian demonstrations united truckers angered by a vaccine mandate for trans-border traffic.

But in France it is ordinary citizens angry at COVID-19 rules who are taking to their vehicles. The protests show signs of uniting disparate opponents of President Emmanuel Macron, two months before an election in which he is expected to stand again.

Public irritation in France over COVID-19 restrictions, including a widely enforced vaccine pass, has already triggered waves of demonstrations and it is growing.

In Toulouse, one woman cheering on motorists said the protesters should defy the police order to stay outside Paris city limits.

“The authorities cannot block everyone,” she said, withholding her name. “The convoys must force it, they must still try to enter.”

Some among a crowd that waved off a convoy of vans, motorhomes, and cars in Vimy, northern France, wore the high-visibility yellow vests that characterized those pre-pandemic popular protests of 2018 and 2019.

With spiraling energy prices and a strong economic rebound driving inflation higher, households are again feeling a squeeze on budgets and public frustration is simmering.