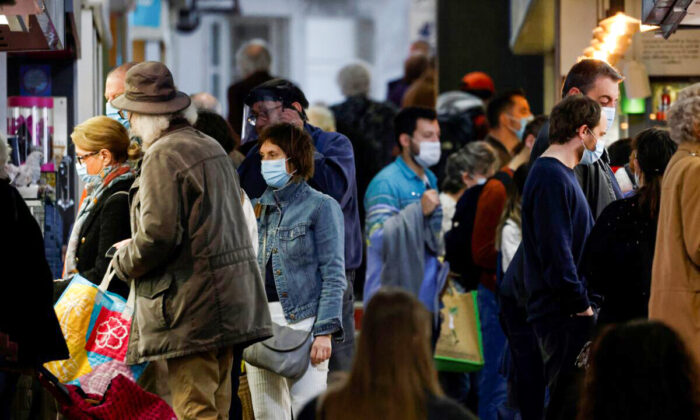 People, wearing protective masks, shop at a local market in Nantes amid the COVID-19 outbreak in France, on April 1, 2021. (Stephane Mahe/Reuters)
Economy

PARIS—France posted its strongest growth in over five decades last year, hitting 7 percent as the euro zone’s second-biggest economy bounced back from the COVID-19 crisis faster than expected, data showed on Friday.

The economy grew 0.7 percent in the final three months of the year after a particular strong third quarter when it grew 3.1 percent, the INSEE statistics agency said in a preliminary report.

Economists polled by Reuters had on average forecast fourth quarter growth of 0.5 percent.

The better-than-expected end to the year meant the economy grew 7 percent in 2021 as a whole, the strongest since 1969, after an 8 percent contraction in 2020 when strict COVID-19 lockdowns were in force.

“There are still some sectors that are still having trouble, like tourism and hotels, but most are recovering very strongly and that’s creating jobs.”

Businesses and consumers are once again having to contend with tighter health restrictions as France faces its fifth wave of COVID-19.

While the economy is starting 2022 on a softer footing, the central bank has said the economic impact of the current wave should be minimal as the economy has largely adapted to living with a pandemic.

“But whether Macron can convince the French electorate to give him another five years is still not a done deal,” she added.

INSEE said that the economy had recovered to pre-crisis levels of activity in the third quarter as a vaccination campaign gained momentum and the government eased COVID-19 restrictions.

In the fourth quarter, growth was driven by consumer spending rising 0.4 percent even though it slowed from an exceptionally strong 5.6 percent jump the previous quarter as the economy reopened after a lockdown.

Growth was also boosted by companies replenishing depleted inventories, with stock-building adding 0.4 percentage points in the fourth quarter after representing a 0.7 percent drag in the third quarter.