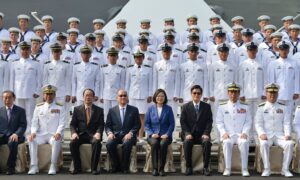 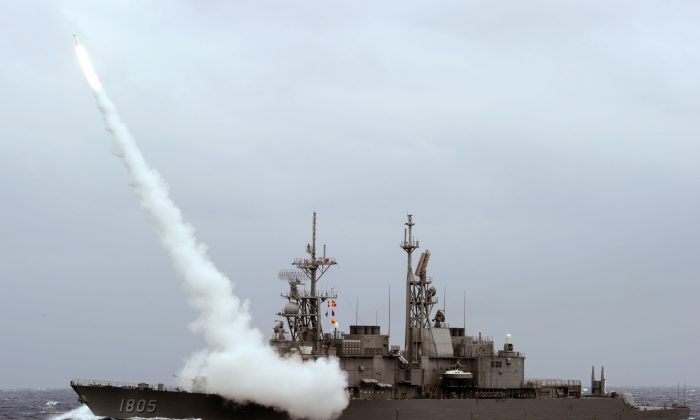 A Taiwan destroyer launches a surface to air missile during exercises meant to simulate an attack by the People’s Republic of China, near the east coast of Taiwan on Sept. 26, 2013. The Trump administration has recently taken steps to strengthen cooperation between the U.S. and Taiwan militaries. (Sam Yeh/AFP/Getty Images)
Thinking About China

As it did in 2010 and 2015, the United States should defy Chinese threats to impose economic sanctions against U.S. companies that make weapons sold to democratic Taiwan, as these arms sales help preserve a peace that is in the highest interest of Americans, Taiwanese and Chinese.

“The Chinese mainland increasingly dominates the cross-Straits situation while exercising restraint … The U.S. and Taiwan must not step out of line; otherwise, a price must be paid. We might as well make a bold assumption. If an arms sale between the U.S. and Taiwan is not acceptable to the Chinese mainland, if the latter announces it would resolutely destroy the equipment once they are placed on the island, what would happen?”

A campaign of military coercion against Taiwan has preceded and followed the latest U.S. arms sales announcement.  On June 30, the People’s Liberation Army (PLA) Rocket Force for the first time over open oceans, fired six of its new anti-ship ballistic missiles (ASBMs) from a base in China into the South China Sea. PLARF ASBMs are intended to sink large U.S. Navy ships like aircraft carriers that might be sent to help defend Taiwan.

Then on July 11, Global Times reported on a PLA Navy amphibious exercise held at the end of May. This exercise involved two Type 071 landing platform dock (LPD) amphibious assault ships that can carry 1,000 troops and large civilian Roll-On-Roll-Off ferries that can carry 3,500 troops. Taiwanese sources estimate that with formal and informal sea lift the PLA could transport over 120,000 troops to the island.

On July 17, the Straits Times of Singapore cited unnamed Chinese sources saying Chinese leader Xi Jinping will push for political talks with Taiwan after its upcoming December presidential election, but China only wants one outcome: Taiwan’s eventual surrender to Chinese Communist Party (CCP) control. As Taiwanese overwhelming reject the prospect of such a surrender, Xi could accelerate his invasion plans.

But getting its forces onto the island is the main PLA challenge. Weapons like the M1A2T Abrams are more than a match for the PLA’s latest main battle tanks and can take out all PLA medium and light weight armor that would form the initial wave of an invasion.

This is why on July 12, the Chinese Foreign Ministry announced that it would impose sanctions on U.S. companies that made weapons sold to Taiwan. Then on July 15, Chinese state media web pages listed companies: General Dynamics; Honeywell; Oshkosh; and Gulfstream Aerospace.

So far, it looks like China may simply be interested in trying to coerce these companies instead of doing real damage. If it was serious it would be sanctioning aerospace behemoth Boeing, which made the AH-64E Apache attack helicopter sold to Taiwan in 2011, also great for repelling PLA invasion forces.

Perhaps China is deterred from going after Boeing because it has made some 1,500, about half, of the passenger aircraft used by China’s airlines, which carry about 1.6 million passengers a day. Perhaps China wants to avoid calling attention to the fact that its airlines are organized into “militia” units under the PLA Air Force and would be used in any invasion of Taiwan.

Any potential U.S. counter sanctions that might affect the insurance or certification status of those airliners, potentially barring them from foreign airports or grounding them, would impose a significant economic penalty on the Chinese people. In any Taiwan-related sanction game, the balance of power resides with the United States.

This is due to longstanding U.S. bi-partisan support for a democratic Taiwan, which has been vindicated by Taiwan’s consolidation of its transition to democracy.  Taiwan’s fourth democratically-elected, President Tsai Ing-wen, just completed four days of “transit” in the United States, visiting New York City and Denver to huge acclaim. The Pentagon already talks about Taiwan’s stellar example as a member of the Indo-Pacific Community.

What would a reversal of these positive changes by a coerced “unification” with China really mean for Taiwan: the soft suppression that horrifies the millions who have taken to the streets in Hong Kong? Or a replication of China’s “reeducation camps”—now imprisoning an estimate 1 million Uyghurs—in a wholesale effort to “reeducate” or even exterminate Taiwanese?

If Beijing pushes harder, why not just end the Kissinger-era charade of “One-China Policy,” in which the United States agreed to limit its political relations with Taiwan. Why not a “normal” relationship with a revived Mutual Defense Treaty that Jimmy Carter dropped in 1979?

America’s highest interest on the Taiwan Strait, for both the U.S. government and the U.S. business community, is to preserve a free Taiwan that is also free from the threat of war from China. Thus, it remains in America’s interest to provide Taiwan with the means to deter such a war. This means selling Taipei defensive weapons like F-16V fighters, and new offensive weapons like hypersonic missiles that the Trump Administration is trying to rapidly develop.

Furthermore, the United States requires new tactical nuclear weapons to make clear to China that it can deter potential Chinese and Russian military cooperation against Taiwan. With Washington’s continued help, Taiwan can deter Chinese coercion and deter war on the Taiwan Strait.

Richard D. Fisher, Jr. is a senior fellow with the International Assessment and Strategy Center in Potomac, Maryland.