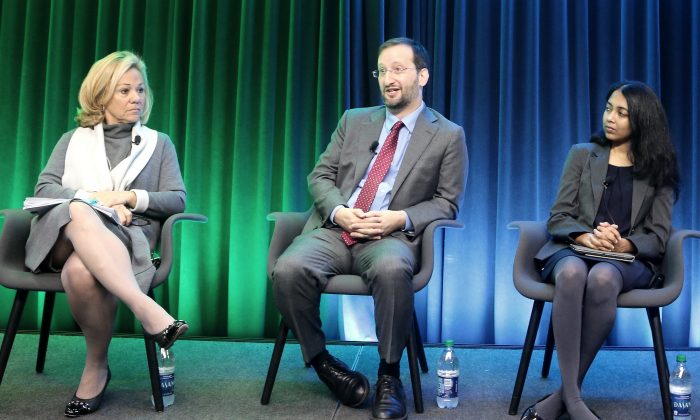 WASHINGTON—The hope that the Internet would facilitate the democratization of the world and expose human rights abuses received some setbacks this year. Internet freedom around the globe generally declined, according to Freedom House’s new report “Freedom on the Net 2015.”

Perhaps we were naive to believe that the growth of the Internet worldwide—now 3 billion—would advance democracy and human rights, expose corruption and wrong doing, and lead to political reform. However, authoritarian governments have not been passive watching the successes of Internet journalists digitally organizing through social media, as occurred during the Arab Spring. Pushback from repressive governments was to be expected. New technologies are providing repressive governments the tools to dominate the Internet and  to further the repression of its users, as is happening in China, Cuba, Iran, and elsewhere.

Freedom House, established in 1941, is an independent watchdog organization that supports democratic change and human rights. It is renowned for tracking the status of freedom around the world, and this report focuses on Internet freedom.

“Freedom on the Net 2015” was a large undertaking by a small team of Freedom House working with over 70 local researchers and advisers in 65 countries. These countries were intended to be representative of all countries that are connected to the Internet. The researchers utilized a comprehensive scoring of Internet freedom: extent of censorship, government filtering and blocking websites, physical attacks and jailing of activists and bloggers, state use of surveillance, and much more.

Considering all the known “obstacles to Internet access,” “limits on content,” and “violations of user rights,” Freedom House carefully scores each country and assigns one of three categories: Free, Partly Free, Not Free.

While numerical scores assigned to the countries may not represent exact differences, Freedom House states in the report that its staff reviews the final scores to ensure the relative rankings are reliable and make sense.

The majority of the countries, 47 of the 65, censor criticism of government authorities, which tops the list of censored topics. For example, the report cites Thailand where “authorities blocked thousands of sites featuring poetry, plays, and online radio services.”

“It was quite shocking to see that 61 percent of Internet users live in countries where criticism of the government, military, or ruling family has been subject to censorship,” said Sanja Kelly, Freedom House’s project director for the report. Freedom House hosted Kelly and a panel discussion when the report was released on Oct. 28 at Google Washington, D.C.

It was quite shocking to see that 61 percent of Internet users live in countries where criticism of the government, military, or ruling family has been subject to censorship.
— Sanja Kelly, project director, Freedom on the Net 2015

Nearly half (47 percent) of the people “live in countries where individuals were attacked or killed for their online activities since June 2014,” said Kelly.

In 28 out of 65 countries, authorities censored accusations of corruption or misuse of public funds. The government silenced its political opposition in 23 countries by removing content or blocking websites. Twenty-three countries were censored for satire. In Bangladesh, a 25-year-old was sentenced to seven years in prison for sharing a satirical song using his mobile phone.

“For the first time in our [ongoing] study, more governments are now pressuring companies and individuals to remove content, as opposed to simply blocking [and filtering],” Kelly said.

Authorities in 42 of the 65 countries “required companies to restrict online content, threatening to revoke their operating licenses or block entire platforms if the specified content is not removed or hidden from view,” states the report.

Google, Facebook, and Twitter make public the number of requests from government agencies and courts that they receive and their compliance rate. These kinds of requests are increasing in recent years.

The reason given is that removal is more effective than blocking. With the exception of highly authoritarian countries, such as China, Iran, and Cuba, a country that wants to censor will generally lack complete control over the nation’s information and communications technology (ICT). Consequently, blocking must be applied by many Internet service providers, with uncertain results. Removing the source of the content also eliminates the possibility of circumvention of the filtering, which is possible even in tightly controlled countries.

The result is that the task of censorship has been shifting to the individual or private company that must proactively monitor its networks and delete content to avoid penalties. Alternatively, intermediaries—service providers, content hosts, or webmasters—are being held liable for the content and made to censor content.

In Bahrain, following the arrest of the creator of a satirical Twitter account, almost 100,000 tweets were deleted, and only one remained, which said, ‘They tortured me in prison.’
— Freedom on the Net 2015

A good example is Thailand in October 2014, when the military junta issued a directive that ordered ISPs to monitor and censor content that could disrupt peace and order. The government was actually ordering “the removal of proactive websites, comments, and videos that call for political protests or are critical of the authorities,” states the report.

In China, LinkedIn, which is said to be the world’s largest professional network, censors “politically sensitive material from its users,” states the report. Twitter, Facebook, and Google have refused to comply with similar requirements from China, states the report.

Gady Epstein, media editor for the Economist, who served for 12 years in Beijing as The Economist’s bureau chief, said that China is pushing its own model of global Internet governance of less freedom on the Internet. Lu Wei, who is a kind of Internet czar in China, tried to exercise leverage on Internet companies here when Xi Jinping came to the United States, he said. “The more globally free the Internet is, the more of a challenge to China’s own conception of Internet governance.” But the direction has not been toward more freedom. “I think they are quite happy about that,” he said.

The report states that authoritarian governments coerce individuals to delete content through intimidation or torture. In Bahrain, following the arrest of the creator of a satirical Twitter account, almost 100,000 tweets were deleted, and only one remained, which said, “They tortured me in prison,” states the report. Apparently, the Bahrain government wanted to send a warning to other users.

Eileen Donahoe, director of global affairs, Human Rights Watch, remarked about governments turning to the private sector to engage in the activities of surveillance, law enforcement, and the violation of human rights. “What I was surprised at was the extent to which the private sector is accepting this burdenship (sic) without questioning, feeling there is an obligation to the government without fully realizing they are participating in the violation of human rights.”

In March, India’s supreme court upheld a controversial IT law that authorizes government blocking of online content. But the court changed the interpretation of the law. Blocking orders must provide a written explanation that could be challenged in court. And, the “government has to make reasonable attempts to contact the content originator,” said Chinmayi Arun, research director, Centre for Communication Governance, National Law University, Delhi. A pre-decision hearing is required before the blocking order can be issued.

Over the past year, new laws were passed in 14 of the 65 countries that increased surveillance. Some of these countries are democracies, for example, Australia, where the Parliament passed a law “requiring telecommunications companies to store customers’ metadata for two years, allowing law enforcement and intelligence agencies to access the information without a warrant.” Canada, France, Japan, Italy, U.K., and Kenya—all rated “free”—passed new legislation or issued directives increasing surveillance or restricting user anonymity.

Revelations of extensive government surveillance even in free countries have prompted technology companies to provide data encryption for their customers. Freedom House takes the position that encryption and anonymity are necessary to ensure freedom of opinion and privacy, although these rights are not absolute. This trend has not been welcomed by governments—free and not free, states the report. Even in the United States and United Kingdom, those responsible for security have asked “companies to provide intelligence agencies with a ‘backdoor’ to user data, circumventing encryption,” states the report.

[In some countries, people are imprisoned] just because authorities uncovered encryption on their computers.
— Sanja Kelly, project director, Freedom on the Net 2015

In some countries, people are imprisoned “just because authorities uncovered encryption on their computers,” said Kelly. It is assumed they are terrorists or criminals, because why else would they hide something? The three Al-Jazeera journalists who were detained in Egypt were so accused. In Turkey, three journalists were arrested because encryption was found on one of the computers, and authorities reasoned that they were terrorists because ISIS uses encryption and so they must be connected somehow, Kelly said.

Governments are also working against tools that hide the identity or location of users. International norms for user anonymity are violated in Belarus, Ethiopia, Indonesia, Iran, Kazakhstan, Uzbekistan, and China. Many countries, including Vietnam, China, and Iran, require real name registration for information and communications technology access.

In November 2014, the Chinese regime “introduced a draft counterterrorism law that would require all telecommunications companies and Internet services to provide the government with ‘backdoor’ access and copies of encryption keys.”

The report said that intimidation, imprisonment, and physical assaults were more severe this year, as both authorities and criminal groups made public examples of Internet users whom they oppose. For example, “sentences issued during the 2015 for alleged online insults to Thailand’s monarchy have exceeded 25 years in prison.”