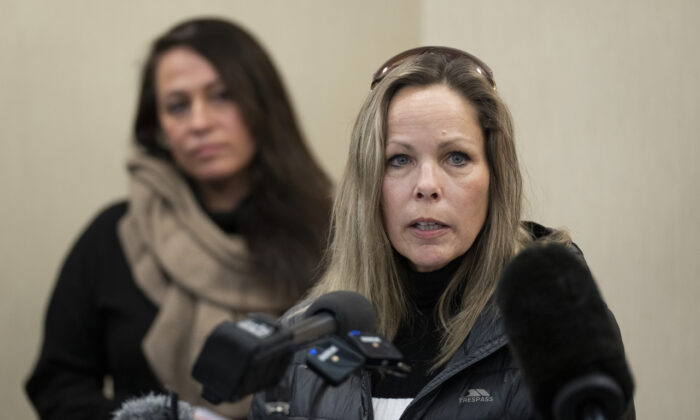 Tamara Lich (R), one of the organizers of the Freedom Convoy, speaks at a news conference in Ottawa on Feb. 3, 2022. (Adrian Wyld/The Canadian Press)
Canada

Freedom Convoy organizer Tamara Lich will remain in jail until July 5, when a full-day bail hearing will be held.

Lich was initially set to attend a bail hearing on June 29, but following a series of delays, the court announced on June 30 that a full-day hearing will be held on July 5 instead.

Lawyer Eric Granger, who is representing Lich, said she is “eager for the opportunity to regain her liberty at the earliest opportunity,” but July 5 is the earliest date that a bail hearing could be accommodated for the new charge.

“It is unfortunate that what this means is that a woman who still has no criminal record, remains presumed innocent of all charges—where the only new charge she’s been arrested on is a single charge of breaching a single bail condition—will be on her ninth day in custody since her arrest before she even gets the opportunity to regain her liberty,” Granger told The Epoch Times in an email.

On June 27, Lich was rearrested in her hometown of Medicine Hat, Alberta, due to a “breach of court conditions” and was to return to Ottawa to appear in court, the Ottawa Police Service said in a Twitter post on June 28. The post said the arrest was made on a “Canada-wide warrant.”

Lich was first arrested in Ottawa on Feb. 17 for her role in organizing the truckers’ Freedom Convoy protest that called on the federal government to end the COVID-19 vaccine mandate and other pandemic-related restrictions. She was charged with counselling to commit mischief and obstructing police, among other charges.

She was denied bail on Feb. 22 in a decision by Ontario Court Justice Julie Bourgeois, who said that Lich’s detention was “necessary for the protection and safety of the public.”

Lich appealed the decision, and after spending 18 days in jail she was released on bail on March 7 after Ontario Superior Court Justice John M. Johnston overturned Bourgeois’ decision. He said Bourgeois’ ruling was too subjective in its assessment of the gravity of Lich’s offences, weighing them against the impacts on Ottawa’s residents rather than other offences in the Criminal Code.

In late April, the Justice Centre for Constitutional Freedoms (JCCF) selected Lich as the winner of its 2022 George Jonas Freedom Award, and she attended an award ceremony in Toronto on June 16. But Crown prosecutor Moiz Karimjee said in May that by agreeing to attend the ceremony, Lich had breached her bail conditions that prohibit her from setting foot in Ottawa, and that she should be sent back to jail to await trial.

On May 25, Ontario Superior Court Justice Kevin Phillips decided that Lich didn’t breach her bail condition, saying that she had a low risk of re-offending after having had “a taste of jail.”

Earlier this week, Granger told The Epoch Times that not much information about Lich’s arrest was available, saying “the court documents simply reflect a warrant in the province of Ontario alleging a breach of a non-communication condition.”