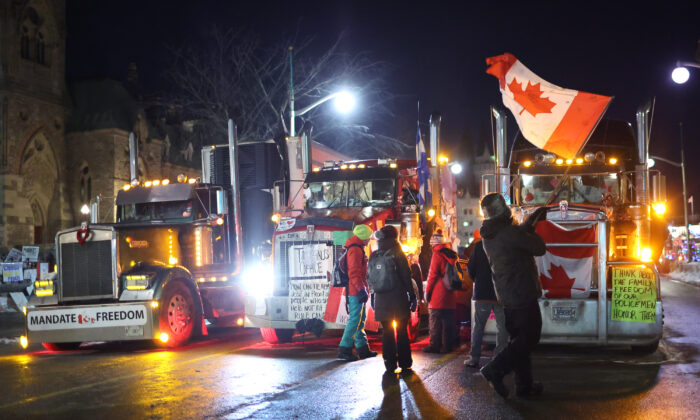 Millions in donations that poured in for the Freedom Convoy appear to be from ordinary people who supported the cause rather than any nefarious activities such as money-laundering or terrorist financing, a senior Canadian financial intelligence official told a parliamentary committee.

Donating to the movement was innocuous before it was rendered illegal by the invoking of the Emergencies Act, Barry MacKillop, deputy director of intelligence at the Financial Transactions and Reports Analysis Centre of Canada (FINTRAC), told the House Finance Committee (FINA) on Feb. 24.

“I think that there were people around the world who were fed up with COVID, who were upset, and saw the demonstrations against COVID [mandates] and I believe that they just wanted to support the cause,” MacKillop told FINA, which is studying the invocation of the Emergencies Act and related measures.

“It was their money, their own money. So it wasn’t money that funded terrorism or that was in any way money laundering.”

MacKillop said that in FINTRAC’s discussions with payment service providers such as Stripe, it appeared that donations were coming from “people who supported the cause before it was declared illegal.”

Some politicians have framed the Freedom Convoy and sympathizers that blocked Canada’s borders in solidarity with the protest as extremists funded by malign foreign actors set on subverting Canada’s sovereignty. These claims are yet to be substantiated.

In justifying the federal government’s invocation of the Emergencies Act, Public Safety Minister Marco Mendicino said on Feb. 16 that the protests were driven by “a very small, organized group, driven by an ideology to overthrow the government through whatever means they may wish to use.”

“We have seen strong evidence that it was the intention of those who blockaded our ports-of-entry in a largely foreign-funded, targeted, and coordinated attack,” Emergency Preparedness Minister Bill Blair Blair said on Feb. 16.

NDP Leader Jagmeet Singh said in the House of Commons on Feb. 17 that the convoy “is a movement funded by foreign influence” and that it “feeds on disinformation.”

“Its goal is to disrupt our democracy,” he said.

The fundraising aspect of the Freedom Convoy has been a core issue since early in the movement, as authorities attempted to stem the flow of millions of dollars going to the organizers.

After GoFundMe removed the fundraiser for the Freedom Convoy under pressure from Canadian officials, convoy organizers turned to GiveSendGo. That crowdfunding platform was then targeted by an Ontario court to freeze the funds. GiveSendGo was then hacked, and some media outlets started publicly revealing the donors to the Freedom Convoy.

When the Emergencies Act was invoked by the federal government on Feb. 14, officials noted the enacting of financial measures was key to taking down the movement. Those measures included subjecting crowdfunding platforms and online payment service providers to anti-money laundering and terrorism financing legislation, as well as freezing the bank accounts of protesters and their supporters without a court order.

MacKillop said that a number of these entities started the process to register with FINTRAC, but with the revocation of the Act on Feb. 23, the process has been halted.

Deputy Prime Minister and Finance Minister Chrystia Freeland announced on Feb. 14 when the Act was invoked that her government would seek to pass legislation to make the measures concerning crowdfunding platforms and payment service providers permanent.

It was not the first time that MacKillop’s testimony before committee ran counter to general portrayal of the protest movement by the government as being linked to nefarious activities.

“What’s happening in Ottawa has not been, to my knowledge, identified as ideologically-motivated violent extremism,” he said when testifying before the Public Safety Committee on Feb. 10.

Ideologically-motivated violent extremism, or IMVE, is the term used by the Canadian government to classify extremism that is not religiously motivated, such as left-wing and right-wing extremism.

MacKillop also said he had not seen a spike in suspicious transactions reporting in relation to fundraising for the protest movement.