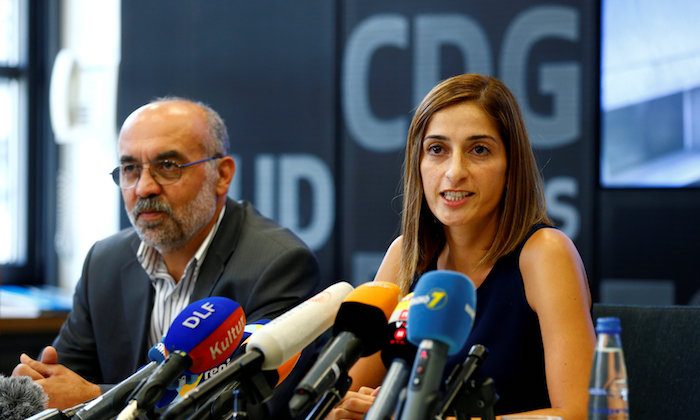 DUESSELDORF, Germany—Journalist Mesale Tolu, released from Turkish prison in December but banned from leaving the country until this week, returned to Germany on Aug. 26 vowing to continue fighting for colleagues imprisoned in Turkey’s crackdown after a failed coup in 2016.

Charged with being a member of a terrorist organization and publishing terrorist propaganda, German citizen Tolu was one of tens of thousands of civil servants and journalists detained after the attempt to depose President Tayyip Erdogan.

“I may be here today, but hundreds of colleagues, opposition activists, lawyers, students—70,000 students are in prison—are still not free,” she told reporters at Stuttgart airport after arriving from Istanbul.

“So I can’t be really happy about leaving the country where I was in prison because I know that nothing has changed there.”

Tolu described how masked armed police officers stormed her home in the middle of the night in April last year, waking her sleeping son and subjecting her to abuse as they searched the apartment before arresting her.

Her husband Suat Corlu is still in prison in Turkey on terrorism charges brought after the attempted coup and she said she would return to the country to appear in court despite the fear that she might be arrested again.

Germany has demanded the release of several of its citizens, some of Turkish origin, as a necessary step toward improving ties with Turkey.

Relations between the NATO partners soured after Germany condemned Turkey’s arrests of some 50,000 people, and the suspension or firing of 150,000 others, including teachers, judges and soldiers.

By Katie Stephens and Reuters TV