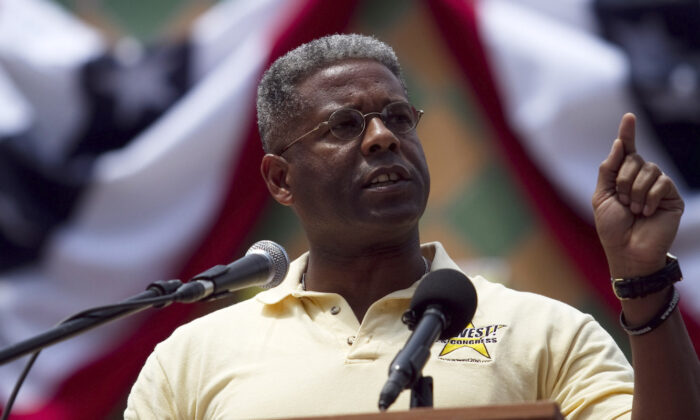 Threats to the national security of the United States are higher than they have been in 20 years, thanks to a new “Axis of Evil” comprising of China, Russia, Iran, North Korea, and Islamic terrorism, according to Lt. Col. Allen West.

Speaking to NTD at the Conservative Minority Conference at Dallas in September, West, who is a combat veteran and a former member of Congress, said the Taliban terror group’s takeover of Afghanistan puts America at risk of higher levels of terrorism, noting that Texas has a “1,254 mile border that is completely unsecured.”

West said that border patrol agents have already apprehended five individuals in El Paso that were on the terrorist watchlist from Yemen and Syria, and said cartels are already working with terror organizations such as Hezbollah and Hamas, while he expects that the Taliban, ISIS, and al-Qaeda will do the same.

“If you don’t think that the Taliban, ISIS, and al-Qaeda are going to work with those cartels, who will take money from anybody and get people into the United States of America through Texas, then you’re delusional,” West said.

“We are at a greater national security threat than we were 20 years ago because now we have taken the Taliban, the exact same people that we removed from power, that [former President] Barack Obama released from Gitmo, and now they’re back in power.”

“And by the way, they have the 30th largest Air Force in the world. They have more Blackhawk helicopters than Australia. They have 6,000 night vision devices and all the other equipment that we left there. We made them a more powerful military force in 20 years,” he added.

The former combat veteran also pointed to the Chinese Communist Party (CCP), which he called a “huge threat” to the nation and the United States’ “number one geopolitical foe.”

West noted that the CCP has “injected” and “implanted” itself into the global economy by means of cheap manufacturing and goods, among other things, making the United States more dependent on it while simultaneously allowing the CCP to maintain their “communist, dictatorial, authoritarian manner.”

“And sadly, we have people in Western economies who want the cheap goods. They want things that are easy, and they have allowed China to come in and become like a tick. It has, you know, implanted itself in and is now gorging itself and getting bigger and bigger. And somehow we’ve got to extract that tick out,” West said.

The former Congress member said President Joe Biden and his family are “compromised” when it comes to communist China, particularly in regards to Status of Forces Agreement talks, and pointed towards China’s interests in Afghanistan’s raw materials, which could give them a further competitive advantage.

“I have to say I think that Joe Biden and his family is compromised when it comes to communist China, especially when we see what just happened in Afghanistan, where now the Taliban is developing the Status of Forces Agreement with China so they can come in and take Bigram Airbase,” West said.

“And what else do the Chinese want? The CCP, what do they want? They want the raw materials and the minerals that are there in Afghanistan, especially lithium, which is so important in electric vehicles, batteries, and things of that nature.”

“It is the whole thing. It is a new Axis of Evil, which will be China, Russia, Iran, North Korea, and Islamic terrorism. And so what you have now actually created is an incredible land bridge of Islamic terrorism that extends from Afghanistan, through Iran, through Iraq, to Syria, to Lebanon. And so it goes all the way over to the Mediterranean. And so if you are Ukraine, Taiwan, Israel, you need to be very nervous,” he said.

The lieutenant colonel also noted that the “clock is ticking” on the Taiwan Strait, where China has been accused of using “provocative” military behavior towards Taiwan after Beijing has sent large numbers of fighter jets into its air defense zone in a sustained military harassment campaign against the self-ruled island.

“I don’t think that this administration is going to go into a strong Status of Forces Agreement with Taiwan and that’s why you see all of the saber-rattling coming out of China right now. This is a very dangerous situation for the world,” West said. “I think that the clock is ticking. The Biden administration, we’re only eight months into it. And that’s a four-year term.”