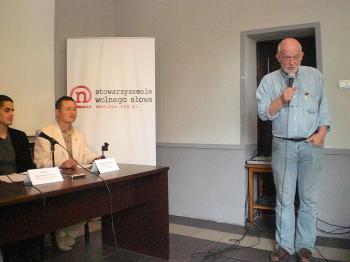 The press conference in Warsaw was held as the petition of 1.35 million signatures was delivered to heads of state in 12 different countries.

Chojecki drew parallels between the efforts of the CIPFG to publicise how Falun Gong practitioners were tortured in labour camps to the efforts of recently deceased Russian writer Alexandr Solzhenitsyn who exposed gulags in the Soviet Union.

“Until he published The Gulag Archipelago, the western democratic world did not want to believe that labour camps existed in the Soviet Union,” he said. “Similarly they refuse to believe that in communist China labour camps also exist, some even close to the Olympic venues, despite the evidence. At these labour camps about half of the inmates are people practicing traditional Chinese meditation of Falun Gong”

On he petitions were submitted to the offices of president Lech Kaczyński, prime minister Donald Tusk, marshal of the Sejm Bronisław Komorowski, marshal of the Senate Bogdan Borusewicz and minister of foreign affairs Radosław Sikorski.