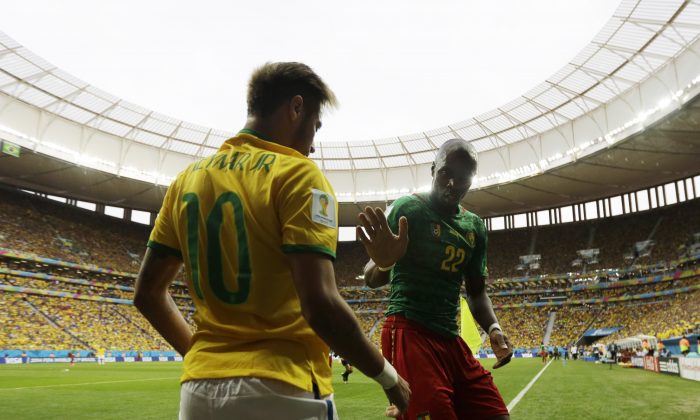 Cameroon's Allan Nyom tries to shake hands with Brazil's Neymar after pushing him to the ground in the corner during the group A World Cup soccer match between Cameroon and Brazil at the Estadio Nacional in Brasilia, Brazil, Monday, June 23, 2014. (AP Photo/Natacha Pisarenko)
Soccer

Fred scored a goal in the second half of the Brazil-Cameroon match on Monday to make it 3-1.

Neymar scored the other two goals for Brazil.

David Luiz had the assist to Fred.

BRASILIA, Brazil—Striker Hulk is back in Brazil’s lineup for Monday’s decisive Group A match against Cameroon, while injured Samuel Eto’o will again start on the bench for the African team.

Brazil will be playing with the same team that opened the World Cup with a 3-1 win over Croatia. Hulk didn’t play in Brazil’s 0-0 draw with Mexico because he complained of a lingering left leg muscle injury. Ramires had replaced him against Mexico.

Eto’o, Cameroon’s most experienced player and the team’s all-time leading scorer, has struggled with a right knee injury. He played in the team’s opener against Mexico but was not fit to play Croatia. Coach Volker Finke said the 33-year-old striker might play “for a few minutes” in what could be his last World Cup match.

Finke is also without defensive midfielder Alex Song, who was given a red card against Croatia. With his team already eliminated, Finke included some players who had not previously started in the tournament.

Brazil has four players going into the match with a yellow card: striker Neymar, captain Thiago Silva, defensive midfielder Luiz Gustavo and substitute Ramires. Another yellow against Cameroon would rule them out of the round of 16.