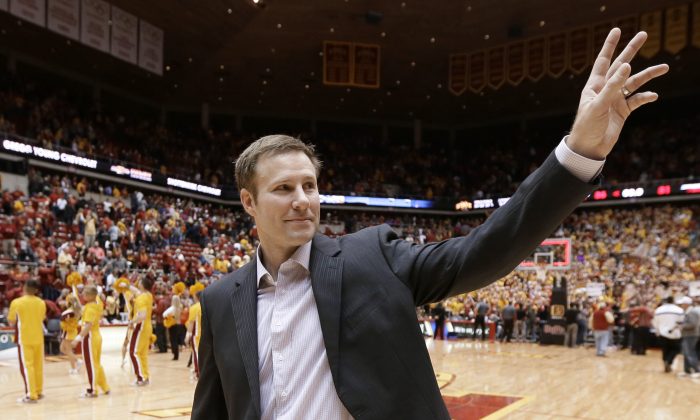 Iowa State coach Fred Hoiberg has been linked to two coaching jobs in the NBA, as one of the hottest prospects in the college ranks.

College coaches jumping to the professional league have rarely had success, but the recent success of Brad Stevens in Boston and the fact that some current college coaches–including Hoiberg–have a body of experience that includes playing in the NBA means that at least one coach could make the jump in the offseason.

Chad Ford of ESPN, discussing how the Bulls and Tom Thibodeau could easily part ways after this season, says that he “wouldn’t be shocked at all” if Chicago taps Hoiberg. “I think he’s the hottest college name right now. He played in the NBA, he worked in an NBA front office and he has a demeanor that they might think the players will be more responsive to,” he said.

Hoiberg, 42, played 10 seasons in the NBA, for the Indiana Pacers, Bulls, and Minnesota Timberwolves. He led the league in 3-point percentage in his last season in 2004-05, at .483 percent.

Ford’s colleague Kevin Pelton agrees that Hoiberg is a viable candidate for the currently-hypothetical Bulls position, as well as the open Denver Nuggets job.

“The Golden State Warriors talked to Hoiberg last summer before hiring one of the coaches to whom Hoiberg is compared: Steve Kerr. Like Kerr, Hoiberg is a former NBA sharpshooter with front-office experience. Before taking the job at his alma mater, Hoiberg spent four seasons as an executive with the Minnesota Timberwolves,” Pelton said.

“Hoiberg’s up-tempo style (the Cyclones rank third in fastest offensive possessions), emphasis on the 3-pointer and creativity building his offense around unique talents like Royce White and current star Georges Niang have also drawn comparisons to fellow Iowa State product Jeff Hornacek. The Mayor may not want to leave his hometown of Ames, but if he does, he’s got an excellent chance of succeeding in the pros.”

If the Chicago job does open up, it would be a vastly different job than the Denver one. The Bulls have an established roster that makes the playoffs every season despite not having much success there. Hoiberg’s job, if he came in to replace Thibodeau, would be to do what Steve Kerr did with the Warriors–keep things that work in place but ditch some other things and tweak still other things. For instance, Thibodeau’s insistence on playing some of his players many minutes could be ditched or at least tweaked a little.

If Hoiberg ends up in Denver, he’d get to make more of an imprint on the roster, but that comes with much more uncertainty since Denver hasn’t been good at all this season. Also, the Nuggets roster could look dramatically different by the start of next season.

Hoiberg signed a 10-year, $20 million contract extension with Iowa State in April 2013, but it included a $500,000 buyout if he leaves to become an NBA head coach or general manager.