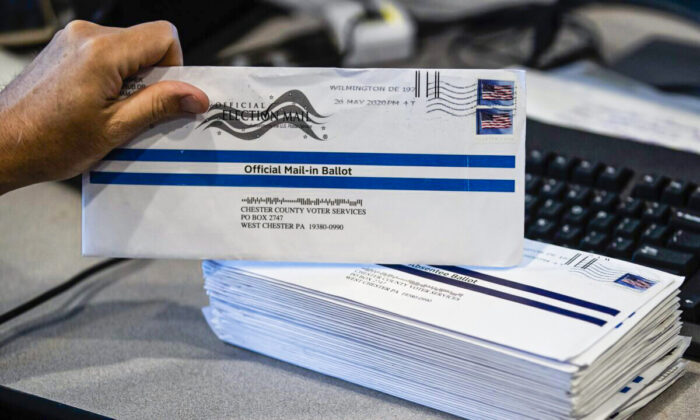 Fraudulent Use of Absentee Ballots, Dirty Voter Rolls Must Be Sorted out Before 2022 Midterms: Experts

Fraudulent mail-in ballots and dirty voter rolls could spawn a series of messy elections around the country, experts fear, saying their threat to election integrity can’t be underestimated.

When a person dies or fails to provide notification of change of address, a “dirty voter roll” is often the result, because the resident essentially remains eligible to vote until the state removes them from their roll. This opens the avenue for fraudulent votes, which is exacerbated by the rise of mail-in voting around the country. Eight states—California, Colorado, Hawaii, Nevada, Oregon, Utah, Vermont, and Washington—allow all elections to be conducted by mail.

On the heels of the 2020 presidential election, several lawsuits were filed to take on a range of claims relating to voter fraud and electoral abuses. Former President Donald Trump and his supporters alleged the presence of numerous irregularities in the voting process. They alleged that taken together, these instances of fraud ensured a win for then-presidential candidate Joe Biden.

But concerned citizens will never know the credibility of any of those claims, because almost all of the lawsuits were dismissed on procedural grounds by the courts, according to Hans von Spakovsky, a senior legal fellow at Washington-based think tank The Heritage Foundation and a former member of the Federal Election Commission.

“We never got to the substantive stage of trial where witnesses could testify and courts could examine their stories, their claims, and determine their credibility,” Spakovsky told The Epoch Times.

According to Spakovsky, fraudulent absentee ballots became a concerning issue in the 2020 election, and their effect must be reined in prior to the midterm elections in 2022 and the next presidential election in 2024. The fraudulent use of absentee ballots involves requesting “absentee ballots and voting without the knowledge of the actual voter; or obtaining the absentee ballot from a voter and either filling it in directly and forging the voter’s signature or illegally telling the voter who to vote for,” according to the Heritage Foundation.

An online database containing proven cases of election fraud by The Heritage Foundation lists more than a dozen cases of absentee ballot fraud in the past two years.

“The whole problem with mail-in ballots or absentee ballots is that they are the only kind of ballots that are voted outside the supervision of election officials and outside the observation of poll watchers,” Spakovsky said.

Ballots thus become susceptible to theft and can be altered, Spakovsky said. Voters can also be “pressured and coerced in their homes” to vote a particular way. Election officials inside a polling location help prevent this kind of fraudulent action from taking place.

“No one can intercept ballots between the time voters mark them and put them in the ballot box—but all that changes with mail-in or absentee ballots,” he said.

Spakovsky acknowledged the need for absentee ballots for people who might be disabled, sick, or out of town on Election Day.

He referred to four previous instances of election fraud—a school board election, a mayoral election, a Democratic mayoral primary election, and a congressional election. Those cases involved fraud committed through absentee and mail-in voting, resulting in a “stolen election,” he said.

According to Spakovsky, another election vulnerability comes in the form of “vote trafficking”—when “third-party strangers” are allowed to go to voters’ homes to pick up ballots and deliver them. This is commonly referred to as “vote harvesting.” This practice “gives the ability of candidates and paid political operatives who have a stake in the outcome of the election to handle something very valuable—the ballot,” he said.

One example is the 2018 election in North Carolina’s 9th Congressional District.

“A hired political consultant and his staff went out collecting absentee ballots from voters, forging signatures, and changing and altering ballots,” Spakovsky said.

As a result of this illegal ballot harvesting and ballot tampering operation, the election was overturned.

“For those who can, I encourage every person to vote in-person to having a ballot stolen, forged or altered, or being coerced to vote a certain way,” Spakovsky said, noting that many states don’t have basic security measures in place to prevent these kinds of activities. “A state ought to require an ID for anyone voting with an absentee ballot.”

When a voter requests an absentee ballot, a photocopy of their ID document should also be sent, he said. A driver’s license or a free state ID would be sufficient to verify a person’s identity. Alabama and Kansas require IDs for both in-person and absentee voting.

Other states, such as California and New York, have no ID requirement of any kind.

“Without a requirement for proper identification and witness signatures, absentee ballots will always be extremely vulnerable,” Spakovsky said.

“Voter rolls have also been in a mess in a lot of states for a long time; ballots are sent to bad addresses,” Adams said.

Duplicate and unlawful voter registrations can have an effect on elections, he noted.

For instance, in a testimony (pdf) before the House Judiciary Committee in June 2020, Adams identified a voter named Rashawn Slade from Swissvale, Pennsylvania, who had registered to vote seven times.

With the prevalence of “dirty voter rolls,” Adams said, “ballots have been sent to abandoned lots, mines, liquor stores, casinos, and many other places.”

In October 2020, PILF released a video that documented visits to nonresidential addresses that were claimed by registered voters in Nevada.

In January, PILF shared a report (pdf) examining Arizona’s voter registration rolls. It found that in 2020, there were 31,641 Arizona voter registrants who had registered for a second time in a new state upon moving.

There were also 863 residents of Arizona who registered twice under variations of their names. Small differences in the way a potential voter spells his or her name can create duplicate registrations, according to Adams.

“A person has the ability, for example, to register to vote using his or her middle name, while also getting registered a second time by using a full middle name,” he said.

People have even transposed their date of birth, essentially creating two different people.

“For the future of the nation’s election integrity, there must be an effort to clean up dirty voter rolls, including those where dead people still remain on the roll,” Adams said.