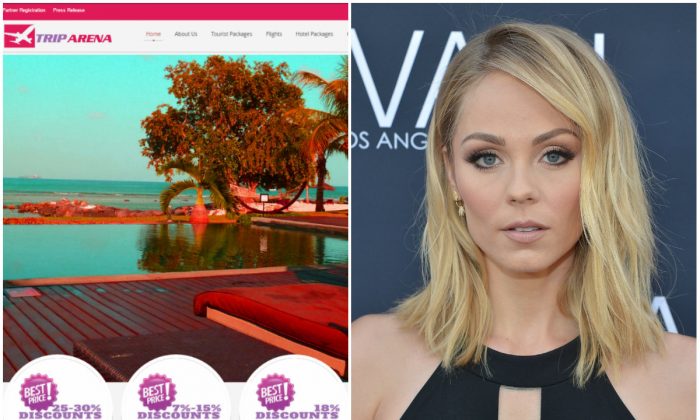 Fraudsters stole the identities of hundreds, including the Supergirl protagonist from the TV series “Smallville,” in a large-scale, multi-million dollar international scheme.

So far, four people have been arrested, according to federal authorities, while others have fled to India, where the whole operation appears to have originated.

One part of the scheme involved stealing identities through fake job listings.

The fraudsters would offer jobs for a company called “Deutche Group.”

They would collect personal information from job applicants and then use that data to set up shell companies and apply for credit cards.

“Qualities we look for in our USA workforce are good moral character, honesty, sincerity and intelligent people with good or excellent credit,” states the Deutche Group website, that has now been largely shut down.

Another part of the scheme involved stolen credit cards and fake IDs.

The fraudsters had an insider in an American Express call center in India, who would supply stolen credit card numbers, according to court documents.

The fraudsters set up at least one fake travel company—Trip Arena (TripArenaonline.com). Customers would book their trips through the company and pay for them, but the company would just keep the money and book the clients’ trips with stolen credit cards instead.

In many cases, the credit card company would discover the transaction was paid with a stolen card and block it.

When an FBI agent, and a “Smallville” fan, looked at one of the passport images, he noticed the holder’s photo showed none other than Laura Vandervoort, the Supergirl protagonist from “Smallville.” She also played a villain Brainiac 8 in the current TV series “Supergirl.”

It seems Vandervoort wasn’t targeted specifically. The fraudsters just took advantage of one of the scenes from the TV series “V,” where Vandervoort appears in a mugshot-style position that can be used as a passport photo.

The Deutche Group is led by a man named Abhiishek Joshi, according to a Facebook page bearing his name.

Epoch Times reached out to Joshi via this Facebook page. A response came on June 20. The responding person asked for contact information and promised to contact Epoch Times “in a few hours.”

By the next day, the Facebook page was taken down.

Joshi (though with the first name spelled Abhishek) is also listed as the director of GoDoggie Ltd. in the U.K.

As one purportedly cheated customer shared online, when booking a trip through TripArenaonline.com, he was asked to make a payment to GoDoggie Ltd.

He said that his flight ticket was cancelled and he lost over $3,000.

“Don’t buy ticket from Trip Arena! They booked my flight with stolen credit card and took my money! I found other person who was cheated and talked with him. His money was taken, too. Two other people’s flight was cancelled without notification,” wrote user Summit52 on in September 2014 on Tripadvisor.com.

“This has happened to me as well. They cancelled our ticket as well. This is big time scam. It is not a company. Its a fraud,” wrote indtraveller101.

Later comments indicated some of the scammed travelers of Indian origin have since organized and filled a criminal complaint against Joshi in India.

Epoch Times reached out to these individuals, but haven’t received a response.

Man in the News

This was not the first time Abhishek Joshi was implicated in a similar scheme.

In 2010 two men named Abhishek Joshi and Ashok Joshi defrauded almost $500,000 through a fake travel booking website flykrazy.com (it has since been shut down), India Today reported. People paid for flight tickets, but never received them.

Another site purportedly scamming travelers was Flyincheap.co.uk (also shut down). User aamir720 complained on Tripadvisor.com that he tried to book five flight tickets through Flyincheap.co.uk and was directed to pay the price, almost $3000, to Trip Arena Travel Services. Yet he said he didn’t get the tickets.

Others have shared similar stories of the Facebook page of UK fraud reporting center Action Fraud.

The TripArenaonline.com website has already been mostly shut down, but that doesn’t mean Joshi is done.

He is listed as a director of six companies in the UK alone. One of them, Flight Buzz Ltd., seems to be related to the website flightbuzz.co.uk.

There doesn’t seem to be any complaint online about the website being a scam, but the reason may be its lack of usability. Its flight search function produces only an error page and its phone number led to a full voice mail box.

All the purportedly fraudulent websites are accompanied by a variety of online content that seems to be aimed at boosting their credibility.

Both Deutche Group and Trip Arena have associated Youtube channels with promo videos. Both have also sent out press releases with bold claims—offering discounts, talking of hiring thousands of people, boasting business worth billions.

The websites also looked rather legitimate, except for less sophisticated interfaces than legitimate travel booking websites usually have. Also, the text on the purportedly fraudulent websites suggest it was not written by a native English speaker.

Authorities arrested four people on June 16, including two from northern Virginia: Amit Chaudhry, 44, of Ashburn, and Jacqueline Green-Morris, 40, of Woodbridge. Two others were arrested in Georgia.

Chaudhry, in particular, seemed caught off guard by his arrest Thursday, telling a magistrate at his initial appearance in federal court in Alexandria that he didn’t understand the charges against him and denying he had any significant ties to India.

Prosecutors say their investigation is ongoing, and they are hoping that victims who came into contact with Chaudhry, The Knowledge Center, the Deutche Group or any of his other business dealings will come forward to help them understand the scope of the scheme.

Those who believe they may have been a victim can file a complaint at ic3.gov, and should use the keyword “CCTRAVELVICTIM” in their description of the complaint.