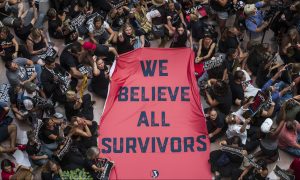 My hat goes off to all hard-working parents, past and present. They raise kids with love, joy, sacrifice, and frustration. My parents did.

Still, the facts show that families raising young kids today are squeezed for time, income, and services to a degree that is more constraining than it was a generation ago. Surprisingly, the Fraser Institute alleged otherwise last week, claiming “It’s never been easier, financially, to raise children in Canada.”

There are millions of parents who wish the Institute were right. So do many young people who delay starting families. Alas, wishing doesn’t make it so. Here’s what is weighing down younger generations.

We all know that housing prices have increased substantially. For those who bought homes decades ago, higher housing prices mean more wealth. But what’s been good for retiring parents is generally bad for their kids. High home prices squeeze generations under age 45 with crushing debt, which they must pay with wages that have fallen compared to a generation ago, and in jobs that rarely contribute a pension.

Gens X and Y have adapted. To compete for better employment, they squeeze in years more of education and tuition. To buy a place, they accept jobs or contracts that require years more of work to save a down payment. And for many, this means they wait years longer to establish their financial independence.

Seeing their adult kids caught between time and money pressures, many Boomers also adapt. They invite their kids to live at home longer, support the cost of post-secondary education, contribute to a down payment, etc.

Even with all this personal adaptation, most in Gen X and Y can’t work their way out of the time-and-income squeeze when they start families. Since two earners bring home little more today than what one breadwinner often did in the 1970s, we’ve gone from 40 hour work weeks to closer to 80 hours. The result? Generations raising young kids are squeezed for time at home. They are squeezed for income because housing prices are nearly double, even though young people often live in condos, or trade yards for time-consuming commutes. And they are squeezed for services like child care, which are essential for many parents to deal with rising costs, but are in short supply, and often cost more than university.

The Fraser Institute study excludes these realities from its analysis. It includes no comparative data from different time periods. So it offers no evidence with which to answer the question “is it financially easier to raise kids now compared to the past?”

The study actually addresses a different issue: what does it cost to raise a child today? The author calculates the cost is between $3,000 and $4,500 a year. He generally excludes what parents pay for housing and child care services. I’ll leave readers to assess whether they think this estimate is realistic.

All should ask, however, why does the Fraser Institute dismiss the reality that younger generations are more squeezed now than in the past? Many will know the Institute is skeptical about the value of government investment. But Gens X, Y, and their kids are not the primary beneficiaries of social spending. Governments spend around $45,000 a year per retiree in Canada, mostly on healthcare, pensions, and retirement income subsidies. This spending is nearly four times larger than government spending per younger Canadian. Grade school, post-secondary, healthcare, child care, parental leave, EI, and worker’s compensation all combine for a total of around $12,000 annually per person under age 45.

Younger Canadians already face a generational imbalance in government spending on top of their worsening wages relative to housing costs. By discounting the time, income, and services squeeze on younger generations, the Fraser Institute distracts attention away from this imbalance. Fortunately, there are Canadians of all ages across the country who believe younger generations deserve a better deal.

Dr. Paul Kershaw is a professor at the University of British Columbia, and the founder of the Generation Squeeze campaign, GenSqueeze.ca.