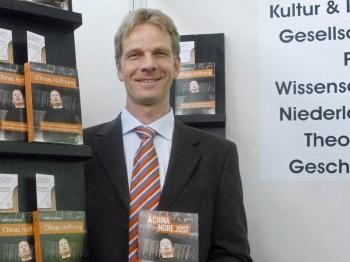 Thomas Kalmund, publisher of Gao Zhizheng`s famous autobiography “A China More Just” promised to exhibit the book during the 2009 book fair. He wants to add other books by critical Chinese authors. (The Epoch Times)
Opinion

Yiwen Li
biggersmaller
Print
“One World, One Dream,” the Beijing Olympics motto is proudly recycled by Chinese Vice Minister for Publishing, Ms. Li Dongdong, during the 2009 Frankfurt Book Fair, where China will be guest of dishonor.

Li Dongdong's last sentence during one of her speeches was, “This Olympic forum of the international book world will create a common world, and a common dream.”

What kind of world, and what kind of dream might develop is open to speculation. It is easier to corrupt the sports world than it is the intellectual world.

Jürgen Boos, director of the Frankfurt Book Fair, told an Epoch Times reporter that in addition to a free market economy, the book fair embraces freedom of speech and expression as one of its basic values.
“The nicest thing is that freedom of speech is not being curtailed, but presents an opportunity to view dissenting opinions in a new light.” These are the comments he also voiced in his speech on October 16, during a preview conference for 2009 with the guests of honor.

China declared to boycott the Seoul International Book Fair 2008 because of differences of opinion unless organizers complied with their demands. The Korean organizers were coerced to compromise.

A Platform for Critics

It’ll be interesting to see how China reacts when authors and writers critical of the regime present the German public with alternate views about Chinese literature and culture. Juegen Boos sees this as a matter-of-fact event, to display alternate views.

During this year's book fair, one of a scant few books from China translated into German stood out—A China More Just. Its author is one of China's best-known, and most ethical attorneys, Gao Zhizheng. He dared to champion human rights in China, and was among the top three contenders for the 2008 Nobel Peace Prize.

Prison for A China More Just

The book is unavailable for purchase on Chinese soil. Because the content in the book was made public, the regime sentenced the author to three years incarceration in 2006, with five years probation. The regime accused him of attempting to plan a political coup, and bring down the communist system. He and his family have vanished over a year ago.

Thomas Kalmund, the German publisher of A China More Just, promised to display this moving and touching book during the 2009 Frankfurt Book Fair. It will be joined by additional books from Chinese authors who are banned in China. Mr. Kalmund is working on publishing more of such books for the coming year.

It is no secret that the Chinese regime censors books and bans newspapers, but that was never touched upon during the recent press conference dealing with the 2009 book fair.

Ms. Li Dongdong proudly spoke of the state-controlled China Press and Publication Organization. An even more powerful censorship organization is the Propaganda Ministry of the Chinese Communist Party’s Central Committee. The propaganda minister is one of China's 24 most powerful men.
When questioned about the censoring of The Epoch Times, she replied that the 1,938 newspapers, 9,468 magazines, and 230,000 books and booklets were a symbol of China's publishing freedom. Only those print media that break the law are forbidden.

This seems to be the same canned speech all representatives of the regime spout forth. How are we to understand why solidly researched reports by Chinese writer Zhou Qing, dealing with China's food safety, are breaking Chinese laws?

The current powdered milk scandal is a clear example of China's lack of food safety, something the regime cannot deny. It was affirmed in Premier Wen Jiabao's public apology where the lax control of those responsible to assure safety was acknowledged.

The Chinese public calls this “crying crocodile tears” and nothing more, because author Zhouy Qing's book “Which Food is the Public's Heaven” was banned. His book can only be purchased outside of China. It has already been published in Japanese, Korean, and Italian.

Zhou wants to introduce the book during the 2009 Frankfurt Book Fair, as he confidently told The Epoch Times, banking on the basic virtues of the Frankfurt book Fair.