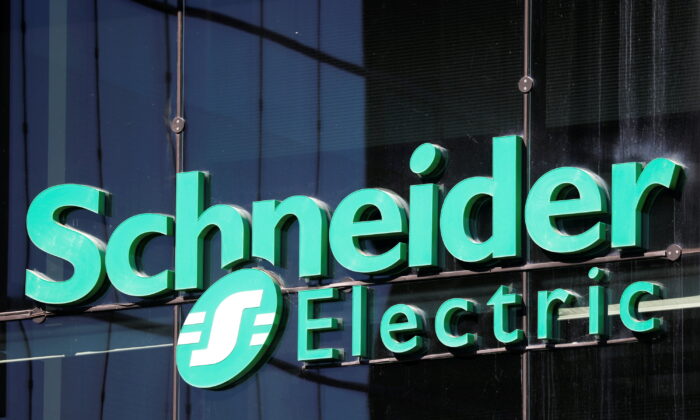 The logo of Scheider Electrics at the company's headquarters in Rueil-Malmaison near Paris on April 22, 2020. (Charles Platiau/Reuters)
Economy

PARIS—French industrial conglomerate Schneider is considering buying out minority shareholders in software company AVEVA, it said on Wednesday, sending the British company’s share price up by more than 32 percent.

Schneider, which already owns nearly 60 percent of AVEVA, said it would decide by 4 p.m. GMT on Sept. 21 whether to go ahead with a bid.

The jump in its shares gave the British company a market capitalization of around 8.6 billion pounds ($10.1 billion), while Schneider’s shares rose by 0.6 percent.

Schneider took majority control of AVEVA in 2017 in its third attempt since 2015 in a reverse takeover that enabled the British company to retain its London listing. The French group paid 3 billion pounds at that time.

AVEVA’s share price has doubled since then, which could result in Schneider paying a bigger price for the remaining shares.

However, even after the jump in shares following the buyout report, they were still below the 4,000 pence-plus price reached during the height of the COVID-19 pandemic.

“At the time of the acquisition, Schneider didn’t want to disrupt the culture of AVEVA, enabling the company to carry on with some independence, while still taking advantage of overlap in customer end markets,” Morningstar analyst Denise Molina said.

“Fast forward to now, AVEVA is now more integrated with a few years of working with Schneider’s software business and the current CEO, Peter Herweck, comes from Schneider. So the risk of disruption through full ownership is not as much of an issue.”

AVEVA said in a statement: “Any such proposal, if and when received, would be evaluated by an independent committee of the board of AVEVA, together with its advisers.”

“Pending any further announcements AVEVA shareholders should take no action,” it added.

Schneider, meanwhile, said that whether or not it eventually made an offer, it was committed to AVEVA and its autonomous business model.

By Sudip Kar-Gupta and Supantha Mukherjee