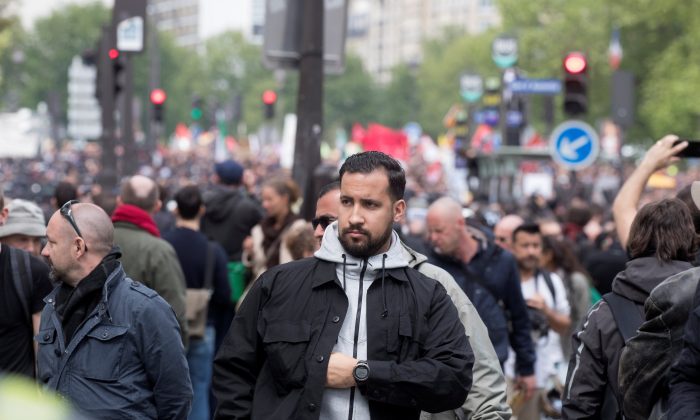 Alexandre Benalla, French presidential aide, is seen during the May Day labour union rally in Paris, France on May 1, 2018. (Reuters/Philippe Wojazer)
Europe

PARIS—French President Emmanuel Macron came under fire on Thursday after his office suspended one of his aides who was caught on camera striking a May Day protester, but did not inform law enforcement authorities.

Critics said the incident reinforced perceptions of a leader out of touch as it came on the heels of controversies over government spending on official crockery, a swimming pool built at a presidential retreat, and cutting remarks by Macron about the costs of welfare.

A video from a May Day rally released by Le Monde newspaper showed a man wearing a police helmet and identification tag dragging a woman away and then striking a demonstrator. He was later recognized as a member of the French presidency staff.

The staff member, Alexandre Benalla, had been given permission to witness the demonstrations only as an observer,” presidential spokesman Bruno Roger-Petit said in a hastily arranged video statement.

“Clearly, he went beyond this…He was immediately summoned by the president’s chief of staff and given a 15-day suspension. This came as punishment for unacceptable behavior.”

The Paris prosecutor, which was unaware of the matter before Thursday, launched a preliminary investigation against Benalla on suspicion of violence, usurping the function of a police officer and using signs reserved for public authorities.

On a trip to southwestern France on Thursday, Macron declined to answer questions from reporters on the subject.

The presidency’s handling of the matter was condemned by opposition parties, which argued that not only was the punishment too lenient but that the incident should have promptly referred to judicial authorities.

“This video is shocking. Today we have the feeling that in Macron‘s entourage one is above the law,” Laurent Wauquiez, president of the conservative Republicains, told Europe 1 radio.

Labor unions hold demonstrations every year on May 1 in France and clashes with police are not uncommon.

After the 15-day suspension, Benalla was brought back into the president’s immediate entourage. He appears in multiple Reuters’ photos alongside Macron during public events.

Benalla also helped organize the festivities surrounding the return home of France’s World Cup champion soccer team earlier this week and is seen next to the team bus.