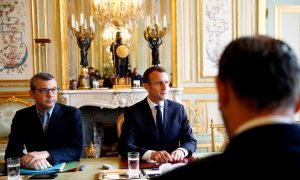 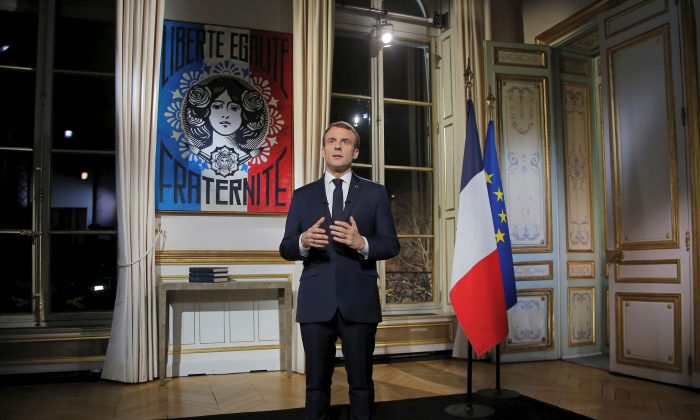 French President Emmanuel Macron following the recording of his New Year's speech at the Elysee Palace in Paris on Dec. 31, 2018. (Michel Euler/Pool via Reuters)
Europe

PARIS—France’s embattled president, Emmanuel Macron, vowed to press on with his reform agenda in 2019, despite the spate of “yellow vest” protests that have challenged his government and extended a plunge in his approval ratings.

Promised overhauls of France’s unemployment benefits, civil service, and public pensions will be undertaken in the coming year, Macron said on Dec. 31 in his televised New Year message.

Confounding some expectations of a more contrite message, Macron struck an unapologetic note as he urged voters to face up to economic realities underpinning recently enacted reforms of French labor rules, and others yet to come.

“In recent years, we’ve engaged in a blatant denial of reality,” Macron said in the address, delivered—unusually—from a standing position in his Elysee Palace office. “We can’t work less, earn more, cut taxes, and increase spending.”

In a veiled attack on the far-left and other extremist groups active on the fringes of the often-violent protests, Macron also decried self-appointed “spokespeople for a hateful mob” who he said had targeted foreigners, Jews, and the press.

Almost 20 months after he became France’s youngest president, Macron’s popularity is at the lowest level recorded in modern French history.

It stood at just 24 percent in late December, compared to 47 percent a year earlier, according to a Journal du Dimanche aggregate of polls, as he struggled to draw a line under numerous setbacks.

The current wave of demonstrations, which have brought disruption and destruction to Paris and other major cities, has yet to abate despite fiscal giveaways and an increase in the wage for the poorest workers.

Protesters had been expected to join the New Year crowds thronging Paris’s Champs-Elysees Avenue overnight, amid a heavy police presence.

Macron said efforts to bolster international controls on immigration and tax evasion would be at the heart of European Union proposals he plans to announce in “coming weeks”—to be pursued in parallel with a domestic agenda reconciling ambitious reform with France’s commitment to social solidarity.

“This is the line I have followed since the first day of my mandate, and which I plan to keep following,” he said. “This coming year, 2019, is in my view a decisive one.”

By Laurence Frost and Michel Rose