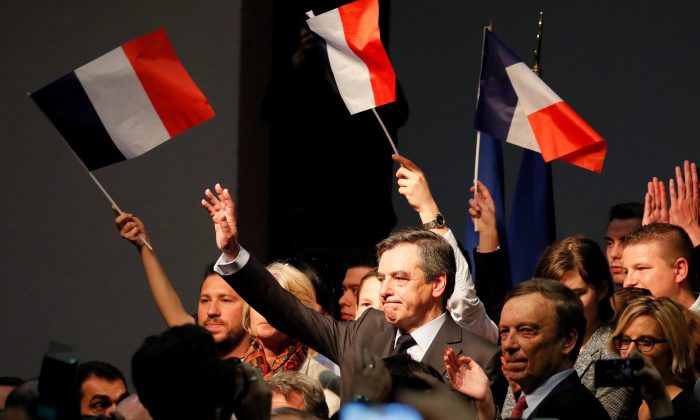 Francois Fillon, former French prime minister, member of the Republicans political party and 2017 presidential election candidate of the French centre-right, reacts at the end of a campaign rally in Pertuis, France on March 15, 2017. (REUTERS/Charles Platiau)
International

Once the frontrunner, Fillon’s troubled election campaign suffered another blow on Tuesday when magistrates put him under formal investigation on suspicion of misusing public funds.

He lags behind independent centrist Emmanuel Macron and Le Pen in opinion polls for the first round on April 23rd, after which the top two go head-to-head in a second round on May 7.

“I am innocent. The judicial system is being taken advantage of,” Fillon told Radio Classique. “I won’t be coming in third. I will be in the second round,” he said, accusing Macron of offering very little to change the country.

“Macron has been trying to seduce everybody. There are no structural reforms in it,” he said.

The former prime minister has said he is the victim of a “political assassination” and on Wednesday added that he had gone back on a promise to stand down if he was placed under investigation because the system had “derailed.”

While he has managed to get The Republicans party to rally behind him and continues to keep a core right-wing vote of about 20 percent, Fillon’s image is suffering.

His legal woes have also coincided with media revelations that his children transferred back to him large amounts of taxpayers’ money that he paid them, and news of a parallel inquiry by parliament’s ethics ombudsman into a 13,000 euro ($13,800) gift of two suits Fillon accepted in February.

All this makes it harder to push his proposed radical economic reforms, for which he has promised to slash the government’s bloated costs.

An Elabe poll published on Wednesday showed that less than 20 percent of French people believe he is honest, down from about 30 percent at the end of January. Only 36 percent of people now think he has the qualities to lead the country.

Daily pollsters Opinionway and Ifop on Wednesday both showed him losing percentage points with him now 6 to 7 points behind Macron, who is in second place behind Le Pen. Both polls show Macron defeating Le Pen comfortably in the second round.

If Fillon were to reach the run-off he is also seen winning, although the gap with Le Pen is closer.