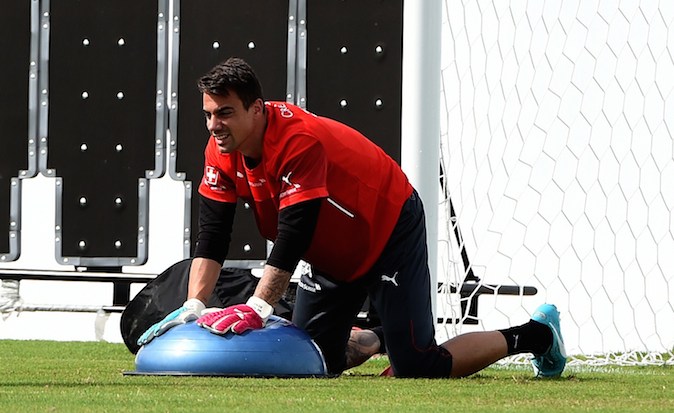 Switzerland's goalkeeper Diego Benaglio takes part in a training session in Santo Andre on June 18, 2014, ahead of their match against France in Salvador during the 2014 FIFA World Cup. (PATRIK STOLLARZ/AFP/Getty Images)
Soccer

France and Switzerland will face each other in a World Cup 2014 Group E match on Friday, June 20.

Whoever wins in Salvador will take a significant step toward clinching top spot in Group E and therefore avoid a likely match against Lionel Messi’s Argentina in the next round. France has a better goal difference and will surely put the Swiss out of reach with a win.

The Swiss will need to contain Benzema, who scored twice in Sunday’s 3-0 win against a Honduras side that was reduced to 10 men before halftime. With eight goals in the past seven games, he is enjoying the best spell of his international career at just the right time.

However, Deschamps is keen to quieten the growing hype surrounding the Real Madrid striker.

“I don’t want him to start thinking that he’s on a mission and that everything depends on him. That’s not a good thing,” Deschamps said. “Everyone believes in him, but he should just be himself and not think that it’s just down to him to make a difference.”

The Swiss opened with a 2-1 win against Ecuador, although Ottmar Hitzfeld’s team can play much better than in that scrappy game.

While the French had to watch their backs — literally — against a Honduras side repeatedly charging into the back of them, Friday’s match is likely to be more of a tactical contest between two well-organized and technically assured sides.

“They’ll be obviously be committed, but it won’t be anything like we had (against Honduras),” Deschamps said. “Their attacking line is much different, with much more individual quality, especially with the wingers who are heavily involved.”

Deschamps picked Antoine Griezmann on the left against Honduras, dropping Olivier Giroud to the bench — much to the disappointment of the Arsenal forward.

“It would be worrying if he wasn’t disappointed. But Didier has choices to make. It was a strategic decision to choose a player who is more comfortable playing a short passing game,” assistant coach Guy Stephan said. “It doesn’t mean the same choice will be made against Switzerland and Ecuador.”

While France has slightly more individual quality in key positions — goalkeeper Hugo Lloris, midfielder Paul Pogba and Benzema are better than their counterparts — Switzerland has the advantage of playing together more.

“They’ve made a lot of effort in terms of developing their players since the 1990s. They were world champions at under-17 level, they were European Championship runners-up in 2011 at under-21 level, and some of those players are playing in this team,” Stephan said. “They’ve been working on a lot with young players and the national team is benefiting from that now.”

One of those is 22-year-old Haris Seferovic, who scored five goals when Switzerland won the under-17 World Cup in 2009 — including the winning goal in the final.

He came off the bench to score a dramatic late winner against Ecuador.

“We’re young and we’re hungry,” he said. “They are strong in attack, but it may be their weakness to want to attack too much.”

It promises to be an intriguing battle in midfield, with Napoli pair Valon Behrami, Goekhan Inler and Bayern Munich’s Xherdan Shaqiri going up against Pogba, Blaise Matuidi and Yohan Cabaye, who is nursing a groin injury.

The 29-year-old Behrami has been a mainstay for the past eight years and is playing in his fourth major tournament. With Juventus’ Stephan Lichtsteiner pushing up to help Shaqiri, France’s left flank is likely to be severely tested.

“Griezmann is a very good player, he is a fox, cunning,” Seferovic said. “But we have Stephan, who is experienced and who will know what to do with regards to taking care of him.”