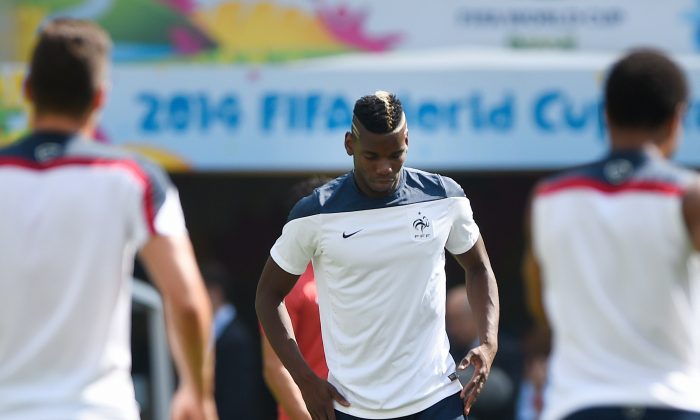 France's midfielder Paul Pogba (C) attends a team training session at the Maracana Stadium Stadium in Rio de Janeiro on July 3, 2014, ahead of their match against Germany in the quarter-finals of the 2014 FIFA World Cup on July 4. (FRANCK FIFE/AFP/Getty Images)
Soccer

France have gotten the better of Germany in their last five matches, winning 3, drawing one, and losing one according to SoccerPunter:

France are 11/5 to win, while Germany are 8/5 to win, according to OddsChecker.com.

Here are how the player rate in the tournament so far.

Hugo Lloris: Good goalkeeping performances without being a stand out. 6/10

Mathieu Debuch: Okay defensively down the right, but isn’t too good with delivering the final ball. 5/10

Raphael Varane: Solid center back, and has an understanding with Koscielny. 6/10

Laurent Koscielny: Quick, dependable, and a good replacement so far for the injured Mamadou Sakho. 6/10

Patrice Evra: Still in good shape despite his advancing years. Struggled at times against pacey opponents. 6/10

Paul Pogba: Dynamic and imperious at times in the center of the park. Finally got his big-game goal against Nigeria in the second round. 8/10

Yohan Cabaye: More than competent distributor of the ball. Helped to control the midfield since returning from injury. 6.5/10

Blaise Matuidi: Performed well in the group stage, but loss some form against Nigeria. 5/10

Mathieu Valbuena: Always a threat from set-pieces and with his thoughtful through-balls. 8/10

Olivier Giroud: Mostly off in his performances so far. Will need to justify his center forward position or risk being displaced. 4/10

Antoine Griezmann: Quick and incisive down the flanks. Might just conjure up a great performance soon. 7/10

Karim Benzema: Didn’t score against Nigeria, but has been brilliant so far in a central role and coming in from the left. 8/10

Manuel Neuer: Excellent positioning and reflexes. Neuer has even adopted the role of sweeper against Algeria, and single-handedly saved Germany’s porous back line. 8/10

Mats Hummels: Out because of an illness against Algeria, but relatively solid so far. 6.5/10

Per Mertesacker: Consistent defensively, but so is his lack of pace. Was exposed badly against Algeria, but tactics could have played a factor in Per’s performance. 6/10

Benedikt Hoewedes: Not a natural left back, and his discomfort with playing in that position showed. 4/10

Philipp Lahm: Right back, left back, or holding midfielder? The German captain can do it all, and Joachim Low has to figure that out. 7/10

Bastian Schweinsteiger: Returned from injury to bring stability in the midfield. 5/10

Sami Khedira: Has struggled so far after recovering from a long term knee injury. Likely to play second fiddle to Schweinsteiger now. 4/10

Mesut Oezil: The star of 2010 World Cup, Oezil has mysterious gone missing in all of Germany’s matches so far. It could be a tactical issue since he’s playing on the flank instead of dictating things in the center of the park, but playmakers shouldn’t be so conspicuously absent for so long. 3/10

Toni Kroos: Linked up well with Schweinsteiger and Lahm, his Bayern Munich team mates. Needs to step it up a notch though and influence matches more. 6/10

Mario Goetze: Like Oezil, Goetze has had negligible impact on matches so far when he’s suppose to be pulling the strings. 3/10

Andre Schuerrle: Excellent when coming off the bench to provide much needed width and pace on the German flanks. 6.5/10

Thomas Mueller: The 2010 World Cup Golden Boot joint winner bagged a hat trick in the opening game, and is goal-less since. Still keeps on popping up in good positions and has come close to adding to to his goal tally. 7/10